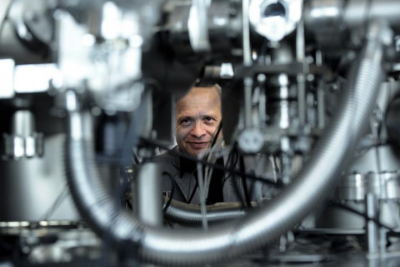 In modern materials research, samples are often bombarded with electrons. Some electrons are then reflected from the surface, and it is these that carry valuable information about the properties of the material. But is information collected in this manner truly reliable and does it definitely pertain to the thin sample being tested, and not, for example, the base on which it is located? A new description of electron backscattering, just proposed by Professor Aleksander Jablonski from the Institute of Physical Chemistry of the Polish Academy of Sciences (IPC PAS) in Warsaw, increases the reliability of the interpretation of measurement data and at the same time significantly reduces the time of analysis.

“In spectroscopic studies electrons penetrate into the material to a depth of the order of nanometres, participating on the way in a whole range of interactions. In computational terms, the theoretical description of this process can be described in short: a complete nightmare”, admits Professor Jablonski.

The energy of the electrons with which the samples are bombarded during materials’ measurements cannot be too high, because the electrons should interact only with the few outermost atomic layers of the material. But it is just these electrons that are very good at sensing the electronic structure of the material in which they are moving. The solution of equations then becomes very complicated and it has to be sought by numerical methods.

“The problem looks like this: I have a sample, I shoot electrons at it, I record those that are emitted from the surface, and on that basis I try to say something about the material. But of all the electrons fired in the direction of the material only some of them will bounce back! In addition, my detector does not pick all of them up, it responds only to those which hit it. So if I now want to interpret the experimental data by comparing them with the results of simulations of electron trajectories, I have to perform very, very many, sometimes tens of millions of these simulations. It then becomes really important if a single simulation is calculated over one-tenth or one hundredth of a milisecond”, explains Professor Jablonski.

The new theoretical description of electron backscatter significantly reduces the time-consuming nature of the calculations thanks to analytical formulas containing certain constants. The calculation of these constants may take weeks, but for the individual elements and energies of the electrons used they only have to be determined once. Currently, they are already widely available in the databases of the US National Institute of Standards and Technology (NIST).

Professor Jablonski adds that the theoretical tools used in spectroscopies acting on the surface can sometimes exhibit great “malice”. In many analyses an important role is played by the Chandrasekhar function, a relationship derived in 1950 by Subramanyan Chandrasekhar, the famous Indian astrophysicist and mathematician, in the course of his attempts to describe the scattering of light in the atmospheres of gas planets. During spectral analyses, the values of this function need to be determined many times and to avoid rounding errors this should be done with great accuracy. Up to now, it was a backbreaking, time-consuming numerical work, which significantly limited the number of possible simulations, and in turn could affect the quality of the interpretation of experimental data.

Electron backscattering plays a fundamental role in surface spectroscopy. Photon backscattering in thick and dense atmospheres of other planets enables us to admire the beauty of Venus, Jupiter or Saturn. Credit: IPC PAS, jch

Recently, Professor Jablonski has managed to not only propose a new theory of electron backscatter, but also analytical methods for determining the Chandrasekhar function. Suddenly, it transpires that instead of complicated integrals, ordinary series need to be calculated and the value of the function can be determined without any great problems with a standard precision of up to 20 decimal places, and sometimes even up to 35!

“In the light of current practice, what is truly ironic, however, is the discovery that in quite a useful range of parameters the problem can be even extremely reduced. The formula for determining the value of the Chandrasekhar function with an accuracy of up to a dozen or so decimal places can be reduced to banally simple mathematical operations! Figuratively speaking: we have just recognised that to get from the North Praga district in Warsaw to South Praga we do not need to buy airline tickets for Beijing, all we need do is walk a short distance. Such discoveries really teach us humility with regard to our own previous achievements”, says Professor Jablonski.

In the theoretical description of important phenomena in surface spectroscopies it is assumed that the surface of the test material is flat. Many materials are difficult to polish so that they are truly flat (at the atomic level). Therefore, materials are often deposited on a smooth surface, which is typically monocrystalline silicon. However, this raises the question: how thick should the deposited layer be, for us to be sure that it is the layer we are studying, not the support? A safe layer thickness can be calculated when the mean free path of electrons in the material is known. Among other advantages, researchers all over the world will now be able to determine this parameter more rapidly and accurately thanks to the new theory of electron backscattering.