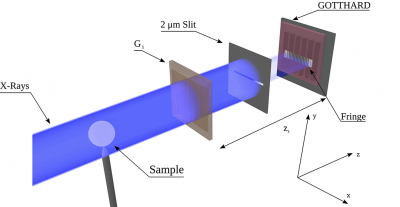 Researchers at the Paul Scherrer Institute’s Swiss Light Source in Villigen, Switzerland, have developed a new design for X-ray spectrometers that eschews a commonly utilised component to lower overall production costs and increase the efficiency of X-ray flux, which may lead to faster acquisition times for sample imaging and increased efficiency for the system. This is essential for biological samples which may be damaged by continued X-ray exposure.

X-ray grating interferometry is an extremely useful tool for investigating the compositions of unknown biological samples. In the traditional setup, a source of interference called the interference fringe necessitated the use of highly-sensitive detectors. In response to this, a method known as Talbot–Lau interferometry was developed and widely adopted. It renders the detector mostly inessential by decoupling the interferometer’s sensitivity from the detector’s resolution. However, a number of manufacturing costs and mechanical complexities ultimately complicate its implementation.

To remedy this, researchers at the Institute for Biomedical Engineering in Zurich and the Swiss Light Source (SLS) have developed an interferometer which does not use the traditional component, called a G2 grating, and instead directly exploits the fringe interference for higher resolution.

“We can perform differential phase contrast imaging with high sensitivity without the need for a G2 grating or a detector with small pixel size in order to resolve the fringe”, said Matias Kagias. Kagias is a PhD student in the laboratory of Marco Stampanoni, the paper’s primary investigator. Kagias and his colleagues have presented their work in Applied Physics Letters.

X-ray interferometry works by firing X-rays at a downstream detector. When a biomedical sample or a piece of material is placed in the beam’s path, the object modifies the observed interference pattern via absorption, refraction and small-angle scattering. Once these signals are picked up by the detector, technicians can determine the sample’s properties using an algorithm.

Along the way—either before or after the sample—the beams pass through a phase grating, which divides the beam into different diffraction orders based on their wavelength. The difference between these diffraction orders introduces an interference fringe—a problematic source of interference which needs to be in the micrometre range in order to achieve high sensitivity for the detector. Unfortunately, such fringes are challenging to record directly over a large field of view.

To work around this, the Talbot–Lau interferometry method utilises an absorption grating, G2, placed right before the detector, and senses the distortions by a procedure known as phase stepping. Here, the absorption grating is scanned step by step for one or more periods of the interference fringe, each time recording an image which results in an intensity curve at each pixel. This allows the interference fringe to be sensed indirectly, while obtaining absorption, differential phase and small-angle scattering signals for each pixel.

However, this ultimately causes the system to be less efficient for each dose of X-rays due to photon absorption by G2. The required area and aspect ratio of the gratings, which are millimetre-sized, further complicate matters by driving up overall production costs.

The researchers’ experimental setup consisted of an X-ray source, a single phase grating and a GOTTHARD microstrip detector developed by the SLS detector group—a significantly simplified version of the traditional Talbot–Lau interferometer. The GOTTHARD detector uses a direct conversion sensor, in which X-ray photons are absorbed , the charge generated from one absorption event is collected by more than one channel for small channel sizes—charge sharing.

“The key point to resolving the fringe is to acquire single photon events and then interpolate their positions using the charge sharing effect, which is usually considered as a negative effect in photon counting detectors”, Kagias said. By interpolating the position of many photons, a high resolution image can then be acquired.

When the researchers implemented the appropriate algorithm to analyse this recorded fringe, they found that the fringes of a few micrometres could be acquired successfully while still retrieving the differential phase signal.

According to Kagias, this ultimately increases the interferometer’s flux efficiency by a factor of two compared to a standard Talbot–Lau interferometer. This may lead to faster acquisition times and a dose reduction, which is essential given X-rays’ potential to damage biological structures.

Future work for Kagias and his colleagues involves moving to large area pixel detectors, and improving the resolution and sensitivity of their setup.