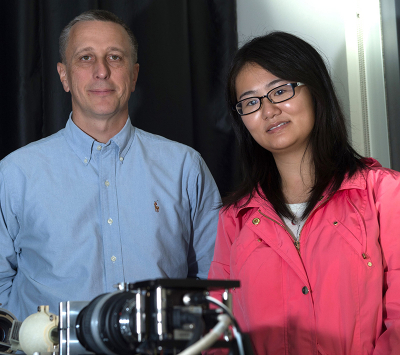 Researchers at Rice University have developed a new compact, fibre-based imaging spectrometer for remote sensing that can capture 30,000 sampling points each containing more than 60 wavelengths. Their work is reported in Optics Express, where they show that their instrument can provide about an order of magnitude more information than has been reported for other fibre-based systems. The device measures 600 × 150 × 150 mm, which is almost small enough for use aboard unmanned aerial vehicles. The researchers say that the instrument could be made even smaller while capturing more than 100 wavelengths from up to 250,000 points. The new spectrometer acquires spectral information instantaneously without requiring any scanning. This allows it to image quickly changing objects such as moving targets or changing imaging conditions.

Imaging spectrometers can use a fibre bundle to transfer the spectral image to a detector or detector array. Spectrometers incorporating this setup usually feature a bundle of fibres arranged in a square at the input end and a single line at the detector end. This means that the number of fibres, and thus spatial resolution, is limited by the dimensions of the detector.

“To increase the spatial sampling for our new fibre bundle design, we placed the fibres into multiple rows with gaps between each row”, said Tomasz S. Tkaczyk from Rice University. “An added benefit of this design is that the size of the gaps can be changed to tune the balance between spatial and spectral sampling to meet specific application requirements.”

Commercially available small-diameter fibres suitable for imaging spectroscopy are typically 125–250 µm in diameter, which quickly drives up the size of the fibre bundle. To keep things compact, the researchers used a commercially available multi-core fibre ribbon in which each fibre has a 10-µm core. They also optimised the fibres’ numerical apertures to increase light gathering ability.

Collecting spectra from more than 30,000 fibres could require an extensive calibration process. The researchers developed a rapid method that takes less than five minutes to calibrate all the spatial samplings of the system and requires acquisition of only a few images.

The research team demonstrated the new spectrometer by using it to image distant scenes and vegetation on the Rice University campus. “These tests demonstrated the system’s spectral imaging capability and showed its significant promise for use in environmental and remote sensing applications”, said Tkaczyk. “Our new rapid calibration method for imaging spectrometers with high spatial sampling could also be extended to calibrate fibre bundles and other imaging devices."

The researchers are now working on further improvements to the instrument. They want to make the fibre bundle even more compact by using custom fibre ribbons and are also examining ways to increase the system’s light throughput.