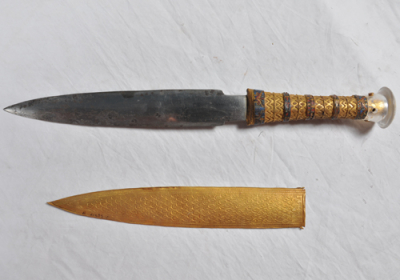 An international research team (Politecnico di Milano, Università di Pisa, Egyptian Museum in Cairo, Italian National Research Council, University of Fayoum, Politecnico di Torino, XGLab Italian company) has documented the meteoritic origin of the iron of the dagger blade belonging to the ancient Egyptian King Tutankhamun (14th C B.C.E). This solves a long-standing debate among scholars since its discovery in the wrapping of the king’s mummy in 1925 by archaeologist Howard Carter.

The study confirms that ancient Egyptians attributed great value to meteoritic iron for the production of precious objects, and the high manufacturing quality of Tutankhamun’s dagger blade is evidence of significant mastery of ironworking already in Tutankhamun’s time.

Massimo D'Orazio and Luigi Folco, professors at the Earth Sciences Department of the University of Pisa, contributed to the research, which was funded by the Italian Ministry of the Foreign Affairs and International Cooperation and the Egyptian Ministry of the Scientific Research. Professors D'Orazio and Folco coordinate the Pisa University meteorite research group, which is an international point of reference in the field of meteoritics and planetary sciences.