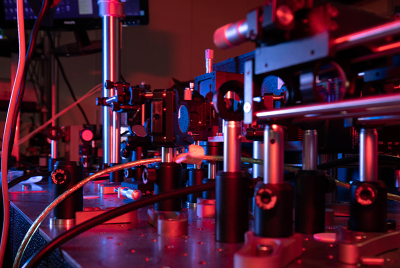 Forced to consider new research opportunities due to lockdown restrictions, researchers from the Physics department of the Politecnico di Milano developed an innovative connection between the field of artificial intelligence and non-linear optics.

Carlo Michele Valensise, first author of the study conducted together with Giulio Cerullo and Dario Polli of Politecnico di Milano and Alessandro Giuseppi of the Sapienza University of Rome, used the lockdown to deepen his knowledge of artificial intelligence, focusing in particular on Deep Reinforcement Learning (DRL). DRL is the branch of artificial intelligence that deals with programming agents able to learn to control automated systems.

The application of DRL on non-linear optics allows the simplification of some processes and, more generally, the speeding up of experimentation. For example, in the phenomenon of generation of white light, one of the most common in this research field, much of the time is occupied by the optimisation process through which stable and broadband optical pulses are then obtained. The work just published demonstrates, as a proof of principle, the possibility of exploiting DRL to automatically automatise this process. The artificial intelligence agent, in particular, autonomously explores the available degrees of freedom to adjust the system and, by studying their effect with respect to the set objective (i.e. the generation of broadband pulses), is able to ensure the proper functioning of the process.

“Artificial intelligence applications are touching ever more disparate areas”, says Carlo Michele Valensise, “although the message often passes that automatic systems can replace human competence. In reality, with our work we are offering help to improve and speed up scientific research. But we must not forget that artificial intelligence is still developed by human intelligence: the role of the researcher therefore remains central.”

Valensise added, “this study was born about a year ago, when, with the restrictions due to the pandemic, we began to explore new research perspectives. Specifically, we became interested in artificial intelligence by asking ourselves a very specific question: how can we exploit it for our research field? We then theorised the techniques at home by developing the idea and then, once the laboratories were reopened, we implemented the experiment, which was successful. The usefulness of this demonstration lies in the possibility for the researcher to delegate long optimisation processes, which are often only the beginning of more complex experiments.”