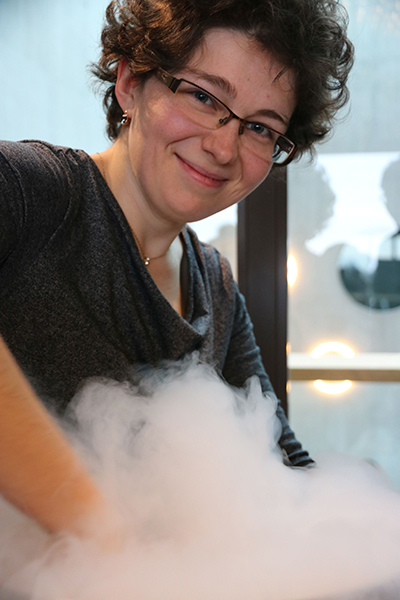 Nitrous oxide (N2O) is considered one of the major drivers of climate change, accounting for 6 % of global warming. The sources of the greenhouse gas are well known and are range from agriculture and the use of fertilisers, to biomass burning and natural emissions from soils and oceans. N2O reduction remains a challenge because the gas is formed by different microorganisms and the contribution of different metabolic pathways to the overall emissions cannot be accurately determined to date. As part of her PhD thesis at Empa, Kristýna Kantnerová developed a new analytical method, based on quantum cascade laser absorption spectroscopy (QCLAS), to identify nitrous oxide molecules containing two rare isotopes of nitrogen and oxygen. In the long term, her work should contribute to a better understanding of the biochemical N2O cycle. For her work, she received the METAS Award, worth CHF 5000, which is awarded to young scientists in Switzerland who make outstanding contributions in the field of metrology in chemistry or biology.

The isotopic composition of N2O changes depending on the formation or decay path. Nitrogen has two stable isotopes, oxygen has three; thus, a total of twelve different N2O isotopic compounds can be formed. The ratio of these isotopocules, or clumped isotopes, is characteristic and is considered a fingerprint for the respective formation pathway. To decipher this fingerprint, Kantnerová developed a new analytical method based on quantum cascade laser absorption spectroscopy (QCLAS) with preconcentration. QCLAS is an established technique in atmospheric chemistry to detect trace gases. However, until now, researchers have lacked spectroscopic tools to distinguish between the doubly isotopically substituted N2O compounds.