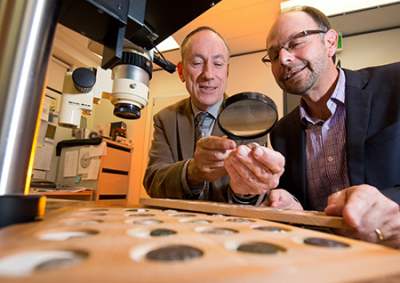 The study was the first to employ a high-power, transportable instrument for XRF spectrometry in a statistically broad-based study of the coin output of one of the most important mints in antiquity.

“The use of this transportable machinery and on-the-spot analysis is revolutionary in the study of ancient history”, Sheedy said. “We hope that eventually our research will enable us to learn more about the role money played in the development of Athenian society as it moved to democracy.”

The team spent three years (2012–2014) doing fieldwork around the world, including in some of the main archaeological museums in the United States, England, Germany, France and Greece.

“Through our evaluation, we gained valuable knowledge about a variety of factors that have influenced the present condition of the coins such as corrosion, historical preservation methods and environmental conditions”, Davis said.

Using this data, the team now plans to determine the degree to which archaic Athenian coinage was produced using silver from the local mints in the Laurion district, located in the south-eastern countryside of Attica.

A video presentation of the team’s work, together with an important selection of archaic Athenian coins and artefacts related to the mining and smelting of silver ores in the Laurion, are on display at the Athens Numismatic Museum in Greece until 31 October 2015 as part of the “When Silver was born…” exhibition open to the public.