Fluorescence correlation spectroscopy to the rescue of chromatography 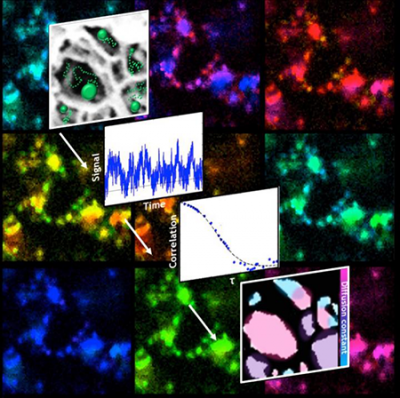 The Rice lab of chemist Christy Landes invented a technique to characterise such nanoscale spaces, an important advance toward her group’s project to efficiently separate proteins of interest for drug manufacture. It should also benefit the analysis of porous materials of all kinds, like liquid crystals, hydrogels, polymers and even biological substances like cytosol, the compartmentalised fluids in cells.

The research with collaborators at the University of California, Los Angeles (UCLA) and Kansas State University appears in the American Chemical Society journal ACS Nano.

“It’s easy to use a fluorescent chemical compound to tag, or ‘label’, a material and take a picture of it”, Landes said. “But what if the thing you want a picture of is mostly nothing? That’s the problem we had to solve to understand what was going on in the separation material.”

“We learned that in agarose, a porous material used to separate proteins, the clustering of charges is very important”, Landes said. While the protein project succeeded, “when we matched experimental data to our theory, there was something additional contributing to the separation that we couldn’t explain.”

The answer appeared to be with how charged particles like nanoscale ligands arranged themselves in the pores. “It was the only possible explanation”, Landes said. “So we needed a way to image the pores.”

The combined technique, which they call fcsSOFI (for “fluorescence correlation spectroscopy super-resolution optical fluctuation imaging”), measures fluorescent tags as they diffuse in the pores, which allows researchers to simultaneously characterise dimensions and dynamics within the pores. The lab tested its technique on both soft agarose hydrogels and lyotropic liquid crystals. Next, they plan to extend their mapping to three-dimensional spaces.

“We now have both pieces of our puzzle: we can see our proteins interacting with charges within our porous material, and we can measure the pores”, Landes said. “This has direct relevance to the protein separation problem for the $100 billion pharmaceutical industry.”