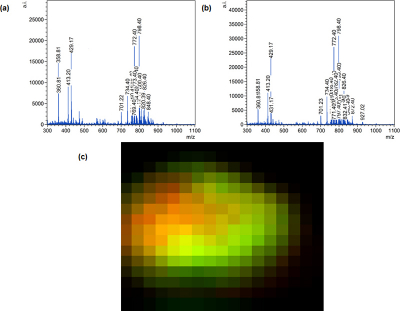 The MAIV (matrix-assisted ionisation in vacuum) mass spectrometry technique was developed by Professor Sarah Trimpin and her group in 2012. They observed that as 3-nitrobenzonitrile (3-NBN), a solid-state crystal matrix, sublimed under an intermediate vacuum and at ambient temperature, gas-phase analyte ions were observed. Mass spectra recorded under these conditions contained multiply charged ions and were very similar to those produced by electrospray ionisation (ESI). One significant advantage of the MAIV technique is that it generates multiply charged ions from peptides and proteins. This is of interest in tissue imaging and profiling experiments as it facilitates their identification by tandem mass spectrometry.

Professor Malcolm Clench and his group at Sheffield Hallam University have recorded the first mass spectrometry images using MAIV mass spectrometry, and the results are published in JSI—Journal of Spectral Imaging. They modified the mass spectrometer’s sampling cone and optimised instrumental parameters to enable an area of ~5.3 mm diameter to be sampled. Imaging of a horizontal section of a rat brain recorded lipids’ signals at good sensitivity and selected ion signals could be overlaid to produce spatial information.

Further work is under way to investigate improvements to the sampling area that can be obtained. It remains to be seen whether the selectivity in sampling area obtainable in MAIV mass spectrometry experiments will make it a viable technique for imaging. However, the data acquired so far suggest that there may be a role for MAIV in mass spectrometry imaging.