Extending the power of attosecond spectroscopy 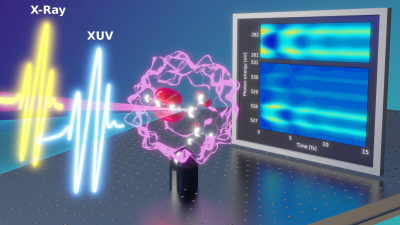 The last few decades have seen impressive progress in laser-based technologies, which have led to significant advancements in atomic and molecular physics. The development of ultrashort laser pulses now allows scientists to study extremely fast phenomena, like charge transport in molecules and elementary steps of chemical reactions. But beyond that, our ability to observe such processes on the attosecond scale means that it is also possible to steer and probe the dynamics of individual electrons on their natural timeframes.

One of the emerging ultrafast technologies is attosecond transient absorption spectroscopy (ATAS), which can track the movement of electrons at a specific site of a molecule. This is a particularly appealing feature of ATAS, because it permits tracing the evolution of the molecular system with spatial resolution at the atomic scale. Modern lasers can push chemistry into unexplored domains of light–matter interactions, where the role of theory in interpreting the results of ATAS measurements will be more important than ever before. But so far, the theory behind ATAS has been developed only for atoms or for molecules either in the absence of nuclear motion or in the absence of electronic coherence.

Now, a team of physicists from EPFL’s Laboratory of Theoretical Physical Chemistry (LCPT) have extended ATAS theory to molecules, including a full account of the correlated electron-nuclear dynamics. The work was carried out in collaboration with Alexander Kuleff at Heidelberg University.

“We present a simple quasi-analytical expression for the absorption cross-section of molecules, which accounts for the nuclear motion and non-adiabatic dynamics and is composed from physically intuitive terms”, says Nikolay Golubev, a postdoc at LCPT.

By extending ATAS theory, the scientists also show that this spectroscopy technique has sufficient resolution to “see” the follow-up decoherence of electron motion caused by the molecule’s nuclear rearrangement.

Putting theory into practice, the team tested the polyatomic molecule propiolic acid as an example. “The simulation of X-ray ATAS of the propiolic acid was made possible by combining high-level ab initio electronic structure methods with efficient semiclassical nuclear dynamics”, says Jiří Vaníček, head of the LCPT. By advancing our knowledge of the correlated motion of electrons and nuclei in molecules, the findings of the LCPT researchers could also help our understanding of various other “attochemistry” phenomena.