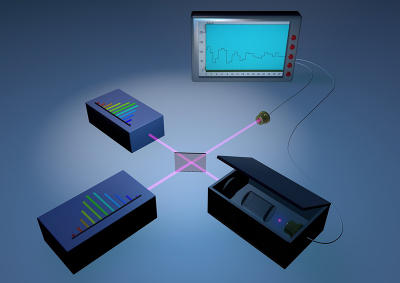 In a proof-of-principle experiment, Nathalie Picqué and Theodor Hänsch from the Max-Planck Institute of Quantum Optics (MPQ) and the Ludwig-Maximilian University (LMU) have recorded broad spectra with close to one hundred thousand wavelengths in almost complete darkness. The experiment employs two mode-locked femtosecond laser and a single photon counting detector. The results have just been published in the Proceedings of the National Academy of Sciences of the United States of America.

A mode-locked femtosecond laser emits hundreds of thousands of sharp spectral lines which are spaced precisely evenly in frequency. Such laser frequency combs are now widely used to count the oscillations of a laser wave and they serve as clockworks in optical atomic clocks. The frequency comb technique has been highlighted when the 2005 Physics Nobel Prize was awarded to Theodor Hänsch and John L. Hall.

During the past fifteen years, Nathalie Picqué at the MPQ has harnessed frequency combs for new approaches to broadband optical spectroscopy (doi.org/gfv547). In her technique of “dual-comb spectroscopy”, all the comb lines of one laser interrogate a sample simultaneously over a broad spectral range, and the comb lines of a second laser with slightly different spacing interfere on a fast photodetector for read-out. Pairs of comb lines, one from each laser, produce radiofrequency beat notes in the detector signal. These radiofrequency signals can be digitised and processed by a computer. Any optical spectral structure in the sample reappears as a corresponding pattern in the comb of radio-frequency signals. Optical signals are effectively slowed down by a large factor equal to the laser repetition frequency divided by the difference in repetition frequencies. The unique advantages of this powerful spectroscopic tool include virtually unlimited spectral resolution, possible calibration with an atomic clock and highly consistent acquisition of complex spectra without any need of scanning or mechanically moving parts.

Picqué and Hänsch have now demonstrated that dual-comb spectroscopy can be extended to extremely low light intensities in the photon counting regime. The interference signals can be observed in the statistics of the clicks of the photon counting detector, even if the power is so low, that only one click is registered over the time of 2000 laser pulses, on average. Under such circumstances it is extremely unlikely that two photons, one from each laser, are present in the detection path at the same time. The experiment cannot be explained intuitively if one assumes that a photon exists before detection.

The ability to work at light intensities a billion-fold lower than usually employed opens intriguing new prospects for dual-comb spectroscopy. Nathalie Picqué explains: “The method can now be extended to spectral regions where at most feeble frequency comb sources are available, such as the extreme ultraviolet or soft x-ray region. Spectroscopic signals can be acquired through highly attenuating materials or through backscattering over large distances. And it becomes feasible to extract dual comb spectra from nanoscopic samples down to single atoms or molecules, which produce only feeble fluorescence signals.”

Theodor Hänsch remembers the moment in the laboratory when an interference pattern first emerged in the statistics of detector clicks: “I felt thrilled. Even after working in laser spectroscopy for more than 50 years, it seemed quite counter-intuitive to me that single detected photons could be ‘aware’ of the two lasers with their large number of comb lines and of the complex spectrum of a sample.”