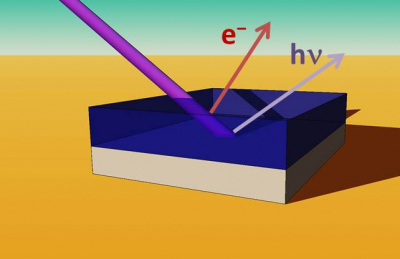 X-ray spectroscopy at BESSY II reveals inhomogenous distribution of chlorine in a special class of perovskite materials. The discovery could help to enhance efficiencies of perovskite thin film solar cells by controlled processing to optimise the chlorine distribution. After performance breakthroughs in 2012, a new class of organic-inorganic absorber material for solar cells has raised worldwide attention. These organometallic halide perovskites are low cost, easy to process and have enormous potential for efficient solar energy conversion: power conversion efficiencies up to 20.1% have already been reported. Pioneering work has been led by the group of Henry Snaith at the University of Oxford in the UK.

Optimal performance for these devices has been achieved with methylammonium lead halide absorbers which use a mixture of chlorine and iodine. Despite typical chlorine-to-iodine concentration ratios of 0.66 in the initial precursor solution, the perovskite films contain little or no chlorine. Depending on the processing procedures, chlorine tends to be depleted, whereas the iodine atoms remain in the material. Nevertheless, the chlorine seems to benefit the efficiency of the absorber material, but it is still not understood how and why.

Now, a team of HZB scientists has analysed samples from the Snaith group and unveiled how chlorine is distributed in the perovskite absorber layer. They used X-ray spectroscopies at the BESSY-II facility to probe the distribution of chlorine in a mixed halide, organic-inorganic perovskite absorber layer. With hard X-ray photoelectron spectroscopy (HAXPES) experiments at the KMC-1 beamline they probed the surface of perovskite layers and found nearly no chlorine near the surface. With a different method, fluorescence yield X-ray absorption spectroscopy (FY-XAS), they probed more deeply into the layers of the sample. “We have observed a higher concentration of chlorine near the perovskite/TiO2 interface than in the rest of the thin film”, David Starr, first author of the publication in Energy & Environmental Science explains.

Chlorine may potentially play a role in mitigating the effects of vacancies, which favour recombination and charge carrier loss, or providing a better template on which to grow the perovskite film. “These results may help to understand the apparent beneficial effects of chlorine for perovskite solar cell device performance and could potentially provide a route to device optimization,” Marcus Bär, who heads the HZB team, says “The ultimate goal is to use this knowledge to tailor deposition processes and material compositions to achieve specific desirable properties; perhaps by completely understanding the beneficial role of chlorine in the Pb-based perovskite material, we can overcome some of the difficulties involved in replacing the Pb with a less toxic material.”