With climate change and other stressors impacting our seas and oceans, coral reef degradation has been brought to the forefront of the climate change issue. Coral reefs are critically important for the ecosystem goods and services they provide. The health of these systems represents a significant concern for the 275 million people who live in coastal tropical and subtropical nations (within 30 km of corals where livelihoods and food security is largely dependent on corals.1,2 Coral reefs can be incredibly valuable, for example Cruz-Trinidad et al.3 calculated one small reef (10 × 20 km) in the Philippines had an estimated value of $38 million USD/year. This example fiscal valuation only scratches the surface of any reef’s true value as an irreplaceable source of food and natural sea defence to developing countries.4

Corals are very susceptible to disease and conditions synonymous with climate change, as they have low tolerance to stresses such as varying water temperature, salinity and increased solar irradiation. Coral disease is one of the largest causes of reef degradation and coral death. Its incidence has been increasing worldwide since first observed in the 1970s, particularly in the Caribbean, Red Sea and Indian Ocean, linked in part to declining water quality, declining fish stocks, heat stress and, more recently, to ocean acidification driven by anthropogenic activity.5–7 With reports of coral disease incidences increasing from 20 % to 80 % in a three-year period,7 closer monitoring and protection of this valuable natural asset is essential.

The causes of coral bleaching are widely accepted as a general response to external factors or triggers (stressors) such as elevated water temperature, usually accompanied by increased solar irradiation, ocean acidification or bacterial infection.8 With these stressors becoming ever more present, mass bleaching events are becoming more frequent, with the first described in 1984 by Glynn and since then a further three global bleaching events have been described in 1998, 2010 and 2015/2016.9 The most recent mass bleaching event (2015–16) affected 75 % of the globally distributed locations surveyed by Hughes et al.10 and is therefore comparable in scale to the then-unprecedented 1997–1998 event, when 74 % of the same 100 locations experienced bleaching. With global climate-driven bleaching events coinciding with the El Niño–Southern Oscillation (ENSO) phases, average tropical sea surface temperatures are warmer today under La Niña conditions than they were during El Niño events only three decades ago.11 This means that predicted climate change and ocean warming scenarios will herald an increase in the frequency of extreme heating events on coral reefs.

Corals primarily responsible for building modern reefs are hermatypic corals, belonging to the group Scleractinia or Stoney corals. Hermatypic corals contain photosynthetic algae specifically dinoflagellates called zooxanthellae, belonging to the genus Symbiodinium, that live symbiotically within its cells. The relationship is mutually beneficial, the algae provides the corals with energy from photosynthesis and in exchange receives protection and nutrients needed to conduct photosynthesis (Figure 1). Ahermatypic corals do not possess this symbiosis but instead use other means to survive.12 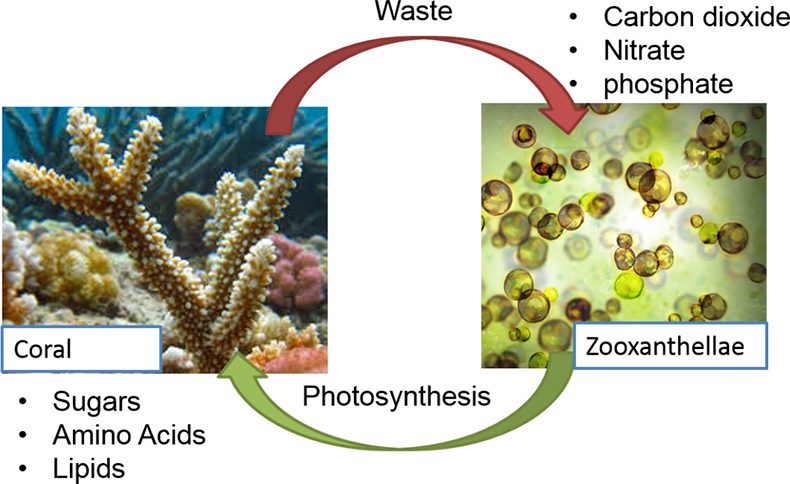 Figure 1. The symbiotic relationship between hermatypic corals and Symbiodinium.

Hermatypic coral communities exhibit a natural fluorescence both from the coral itself and its symbiotic partner. The significance of this is not yet known, several studies have been conducted to try and derive meaning from this and have suggested many possibilities for the role that fluorescent proteins (FPs) play: including (i) acting as a sunscreen by providing a photobiological system for regulating the light environment;13 (ii) as a host stress response, through their action as antioxidants; or (iii) to attract prey.14 All that is known is that downregulation of FPs frequently occurs in injured or compromised coral tissue.15

The presence of FPs and their behaviour as a response to stress can potentially be exploited as a method for measuring coral health. Analysis of the natural variability in fluorescence intensity for a given species, as well as the differences between diseased and healthy specimens, enables the development of an index relating fluorescence to disease.16

Proof of concept and hyperspectral imaging

In order to characterise the subtleties of this natural fluorescence, coral samples at the London Aquarium, provided by coral aquarist Jack Willans, were imaged using a push-broom type hyperspectral camera (Headwall Nano, USA).

This hyperspectral camera captures light across the entire visible (vis) spectrum and some of the near infrared (NIR) (400–1000 nm) in each pixel, but separates the incoming photon (light) flux based on a wavelength, separating the incident light intensity into a large number (hundreds) of spectral bands whilst illuminated by a light source [fluorescence in coral requires ultraviolet (UV) or blue light (400–480 nm)]. This allows the characteristic excitation/emission peaks of coral fluorescence to be determined. Every pixel once processed in the image contains full spectral data relating to that pixel, allowing for the peak wavelength of any observed fluorescence detailed to be determined. The data was processed within the camera to produce a hypercube which could then be viewed in ENVI (Version 5.3.1) (post processing software). Spectra were extracted from various points on each coral sample to determine its emission spectrum.

As Figure 2 shows, the spectra recorded from the corals extracted from the hypercube image indicated that the corals sampled mostly fluoresced in the cyan or green wavelengths (485–512 nm). Samples were selected to represent several different types of corals (branching, plate, soft), including corals known for exhibiting fluorescence and those that were not. 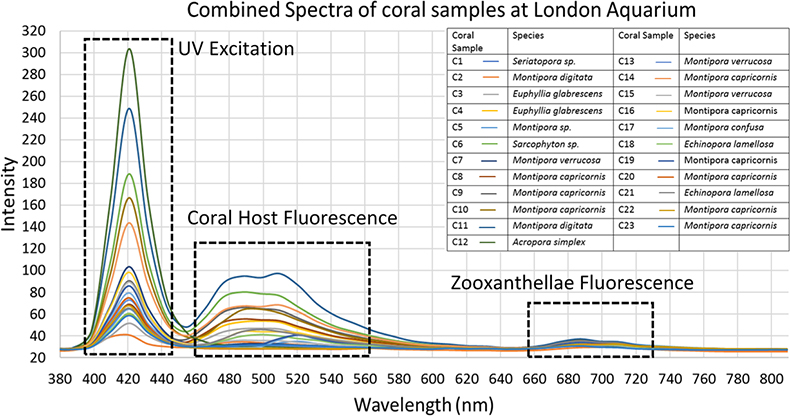 The primary observed fluorescence peaks were used to correlate coral species with emitted colour. Corals exhibiting the colour “cyan” (as classed by Alieva et al.)17 ranged from 459 nm to 516 nm, but with peak fluorescence intensity mainly around 480 nm. Some of the corals did not produce any fluorescence, such as C5, C7, C12, C13, C20 and C22. These made for comparison against actively fluorescing coral spectra. Some of the coral samples exhibited other weaker emission peaks, displaying the presence of dual colour fluorescence, such as C2, which displayed a main peak at 445 nm (cyan) and weaker one at 510 nm (green). Many of the corals exhibited wide emission peaks indicating that multiple colours were emitted by their fluorescence. Many of the spectra show another peak (after 643 nm) which is ascribed to the fluorescence of the coral’s symbiotic partner zooxanthellae.

Having gained proof that hyperspectral imaging had the potential to observe and quantify coral fluorescence, we looked at applying this technique for the detection of bleaching. Coral bleaching refers to the process by which the dysbiosis (breakdown of the symbiotic relationship) of zooxanthellae and the host coral occurs. The process of this dysbiosis is usually the expulsion of the zooxanthellae cells from inside the corals cells where they are typically stored. Depending on the stressor, the rate of bleaching varies but is usually a quick process (can be a matter of hours) in individual colonies and can lead to coral cell death or necrosis as a means of extraditing its once partner.

In order to observe and record the bleaching phenomenon, a laboratory experiment was devised where by coral samples (Montipora digitata) provided by London Aquarium, were placed into an experimental tank containing artificial sea water at a starting temperature of around 24 °C. The temperature was then incrementally increased by +2 °C each week for four weeks until the temperature reached >30 °C (this is the point at which bleaching occurs by temperature). The coral samples were imaged using the hyperspectral camera system at regular intervals throughout the course of the experiment. This purpose was to document the bleaching effect of expulsion of zooxanthellae by monitoring the fluorescence signal which was expected to decrease as they were expelled. The overall health of the coral also degrades due to the bleaching effect and this can also be monitored using the same technique, but looking at the fluorescence peak of the FPs present as opposed to the chlorophyll cells in the zooxanthellae. The collected hyperspectral data from the Headwall nano camera could then be compiled into a hypercube and loaded in to ENVI.

The coral samples for the bleaching experiment were imaged in three light conditions; under white light (Aquarium light bar), blue light (Aquarium light bar 440 nm) and UV light (BlueRobotics UV light pod 405 nm). Under white light illumination, the corals’ colour can be seen to decrease in intensity as bleaching progressed, which provides a baseline akin to that of a traditional coral health survey looking at light reflectance. The colour draining of the coral is a process that can be qualitively observed by eye but using hyperspectral methods we can quantify this loss. The blue light illumination elicited the highest intensity of cyan and green fluorescence but masked some of the coral fluorescence signal in the tail of the excitation peak. The UV lights provided a sharper emission peak over the blue light enabling the whole unmasked fluorescence peak to be seen. The experiment allowed us to observe the bleaching process from a quantifiable spectral data perspective as shown in Figure 3. 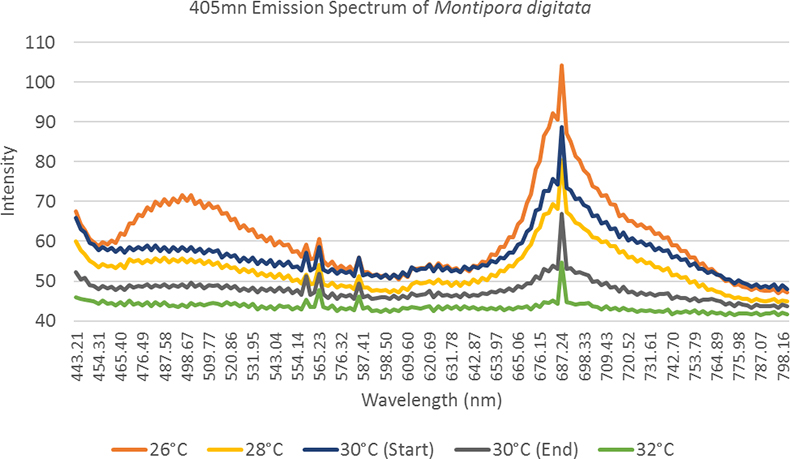 Figure 3. A spectral observation of the “bleaching effect”, as the temperature increases observed fluorescence in both the host tissue and zooxanthellae decreases.

This study was able to detect fluorescence in corals of numerous different species and identify the spectral intricacies as well as observing coral bleaching from a spectral perspective. The results of this initial research provide compelling evidence to prove that fluorescence may be used to indicate coral reef health. The next stage is developing a field deployable system, sufficiently cheap and semi-automated such that reef systems can be automatically and rapidly assessed on a repeated basis.

The field deployable system will be in the form of a portable fully waterproof low-cost hyperspectral imaging system (payload) that can be mounted to an ROV (remotely operated vehicle) (BlueROV2, BlueRobotics) which will act as a stable platform for obtaining images, similar to that provided by drone (UAV) systems in agricultural applications.

The system is required to be “low-cost” (<£10 k) to reduce the high associated costs of commercially available hyperspectral systems and reduce the capital risk of operating in the underwater environment. In order to do this, the monochrome camera (AtikHorizon, Horizon), which ultilises a continuously variable filter, is mounted directly, using a custom 3D printed bracket, on the 16 MPixel CMOS sensor. The filter (LV VIS NIR bandpass filter from Delta Optical Thin Films) has a continuous relationship between the spectral characteristics and the position. The filter has a centre wavelength range between 450 nm and 850 nm. Using a continuously variable filter allows for a standard camera to be modified into a “push broom” hyperspectral camera at very little cost.

The system is then to be deployed over a live reef to gather in situ spectral data in order to assess coral health based on the induced fluorescence (Figure 4). Data will be collected in a similar way to existing drone (UAV) technologies with raster pattern flight paths in order to fully cover the whole reef with enough overlap between images to achieve reliable stitching and production of large area maps, and photogrammetry reconstruction of reef topography to produce three-dimensional models of reefs. This will enable the creation of rapid coral health assessments and a spectral library of coral species known fluorescence emission and fluorescence signatures at various stages of bleaching. 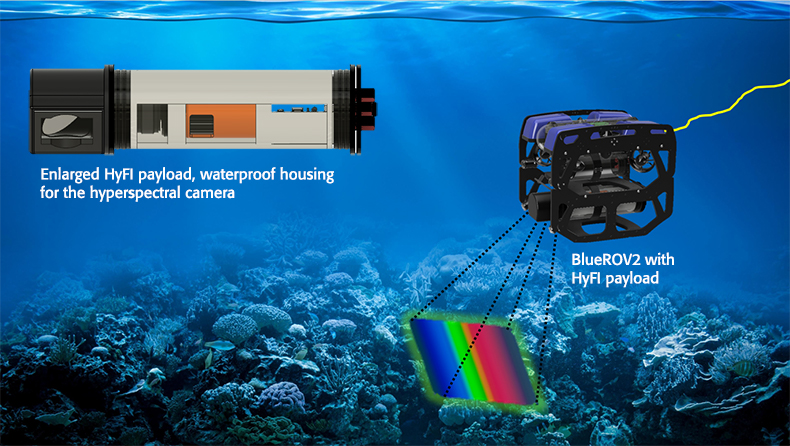 Figure 4. The hyperspectral fluorescence imaging (HyFI) payload, mounted on BlueROV2. Imaging around 1 m above the reef will provide an impact free rapid health assessment. The camera is housed in a custom waterproof housing with a 90° mirrored lens to allow for perpendicular imaging of the reef.