Significant research is underway globally into both improving corrosion protection as well as removing chemicals of concern from existing corrosion protection coatings. This is because the cost of corrosion in developed economies has been consistently shown to lie in the range 2–4% of Gross National Product. The most recent comprehensive study of this type, in 2002 by NACE International in the USA, estimated that the cost was $276 bn, then equal to 3.1% of US GDP.1

For a topic of such magnitude it rarely gets the exposure it deserves except when disaster strikes. From the plague of US gas explosions and oil contamination from pipelines to tanker disasters; high-profile yacht keel failures; sewer explosions; aeroplane and helicopter crashes—the loss of life directly attributed to single corrosion events can be headline-grabbing. However, it is often events much closer to home, such as the perforation of domestic copper water pipes or corrosion failures on vehicles, that we are more likely to experience ourselves. Corrosion protection is an area that has historically used visual inspection and electrochemical testing methodologies. How can novel spectroscopic tools help the development of better products in this field?

How is spectroscopy helping corrosion scientists

The standard technique for examining coating performance and failure is by visual inspection, and this approach is written into many performance standards. A more sophisticated approach combines the dielectric properties of organic polymeric coatings with the electrochemical corrosion process. DC and AC electric testing of systems using electric circuit models that link to physical processes of performance are used. In particular, methodologies such as electrochemical impedance spectroscopy (EIS) are used for the relatively rapid determination of barrier properties of coatings. However, these rely on indirect results delivered from fitting the analytical results to theoretical models to draw mechanistic conclusions. If you are using the technique for the quality control of an existing coatings formulation, where you know the long-term properties of the systems under investigation, this is a good method. However, the mechanistic link is insufficiently robust to support the development of new coatings. For example, although the electrochemical impedance response of a “perfect” organic coating resembles an electrical capacitor, coatings that are failing or interacting with their environment to actively inhibit the corrosion process produce far more complex electrical responses. Data modelling of EIS includes fitting terms associated with the coating resistance, the electrochemical double layer at the surface, the polarisation resistance to charge transfer, diffusion and other effects. It is even more challenging to unambiguously separate Faradaic processes (i.e. those associated with corrosion reactions) from non-Faradaic process (i.e. associated with changes and breakdown of the polymeric structure). Even for a relatively simple system, the interpretation is carried out by fitting multiple, often non-linear, models to the data. As such, debate around the interpretation of the results can result. Once water penetrates a coating and active corrosion protection starts, the solutions become an order of magnitude more complex. So rather than guessing what is happening, would it not be far better to actually look into the coating and use spectroscopic analysis to follow the chemical changes within the coating and its interaction with the metal substrate?

How do protective coatings work?

A polymer coating applied to a protected surface is composed of a binder (cross-linked polymer resin such as vinyl, acrylic, epoxy, polyurethane) and additives (such as functional pigments including anticorrosive agents and other fillers). Polymer coatings provide corrosion protection in two ways: 1) they form a barrier for corrosive species and block ionic transfer between anode and cathode areas on a metal surface; 2) they act as matrices for dispersed functional pigments (i.e. for anticorrosion, appearance etc.). Active anticorrosive performance from polymer coatings is provided by the incorporation of pigments that function by being sparingly soluble or by ion-exchange with the external environment. These mechanisms result in the migration of active (i.e. corrosion inhibiting) species towards the metallic substrate that delay or interrupt corrosion reactions. The most effective pigments exhibit very limited solubility in water, which prevents excessive leaching and results in long-term release to guarantee a high level of corrosion protection during the entire lifetime of the coating.

What can we currently actually see—what do we hope to see?

One of the most efficient systems with active corrosion inhibition properties involves chromate pigments. However, due to toxicity concerns, markets and regulations require the use of more environmentally-friendly, yet equally or even better-performing, alternatives. Surprisingly, despite the fact that anticorrosive pigments have been commonly used for many years, the mechanism of their performance is not fully understood; particularly when incorporated into an organic coating. Therefore, the development of new anticorrosion solutions is based on screening tests that do not consider mechanisms of processes occurring in the coatings. Corrosion inhibitors and their interactions with protected surfaces are investigated, but how they function in the coating system is not clear, especially regarding their leaching and migration towards the protected surface. This is one of the main obstacles in effective development of new systems.2 Notably, coatings are complex systems that also contain other pigments/fillers which can influence the migration process. A cross-section of a conventional coating system (i.e. primer + top coat) imaged using SEM (scanning electron microscopy) is shown in Figure 1(a), while the additional chemical/analytical information that can be gleaned from the application of energy dispersive X-ray spectroscopy (EDS) is shown in Figure 1(b). 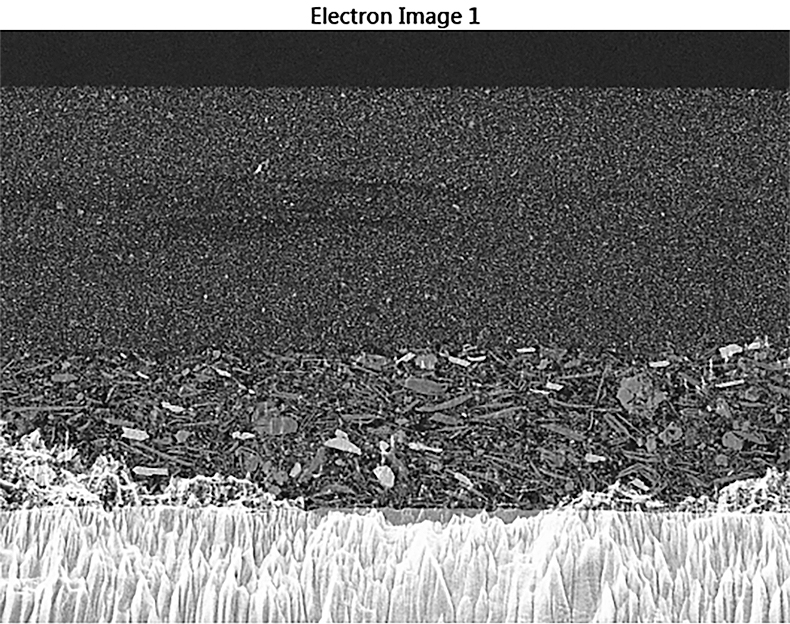 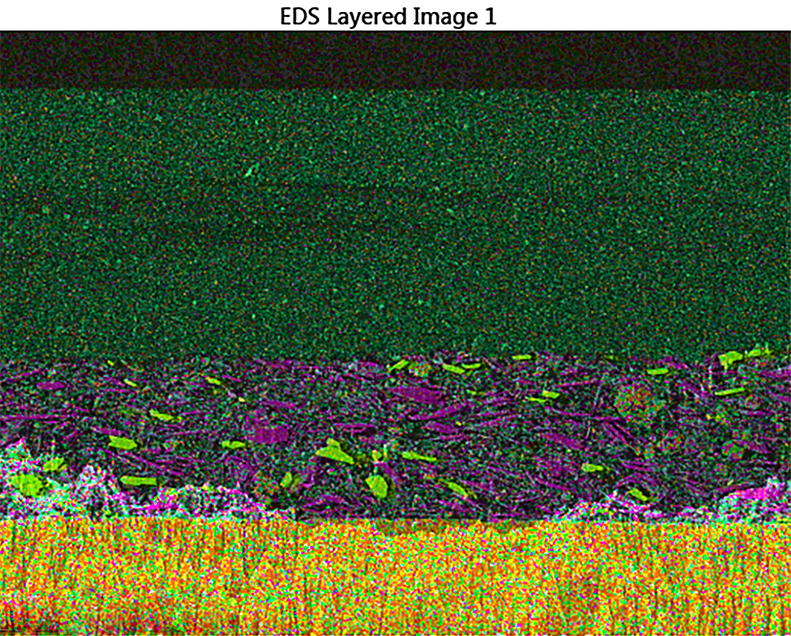 Figure 1. The cross-section of a conventional coating system (primer + top coat) on a metallic substrate imaged by SEM (a) with additional analytical information obtained from EDS (b).

How is the migration of species from the pigments within coatings actually investigated? Generally, indirectly by leaching experiments of pigmented coatings immersed in electrolyte solution, where the concentration of inhibitor in the external solution is measured using, for example, inductively coupled plasma mass spectrometry (ICP-MS). The distribution of pigments in the films and changes occurring upon water penetration and pigment leaching can be directly characterised by, for example, Raman spectroscopy, scanning electron microscopy (SEM)/EDS or scanning transmission electron microscopy (STEM)/EDS. In such a case, the depth of pigment depletion is estimated based on the analysis of cross-sections of the film after exposure. The next step is analysis of the coating systems with the pigment particles in 3D by means of X-ray computational tomography (XCT) or SEM-based 3D sectioning techniques. XCT is a non-destructive method which allows monitoring particle distribution in the matrix, however, with limited resolution (up to 0.5 µm). SEM-based 3D imaging techniques can provide higher resolution (~5 nm), but since they are destructive, in situ experiments are not possible. An example of a 3D reconstruction of a coating sample with SrCrO4 particles after a leaching experiment is presented in Figure 2. This type of analysis allows the structure of particles and voids formed after pigment leaching from the matrix to be followed. 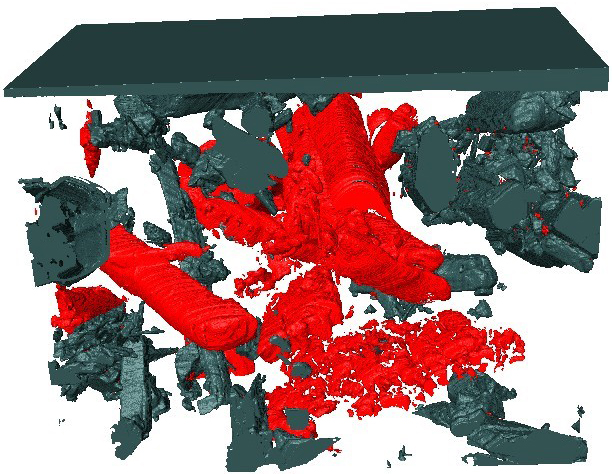 Figure 2. Coating containing 15% vol. of SrCrO4 particles; the image was reconstructed from serial sectioning using a focused ion beam (FIB) accompanied by serial SEM imaging. SrCrO4 particles (grey) and voids (red) are shown after exposure of the sample to NaCl solution. The field of view is 12 × 12 µm.

The mechanism of pigment migration proposed recently assumed that it occurs initially through direct dissolution of pigment particles upon contact with the electrolyte, but then changes to diffusion through connected void pathways created after pigment leaching.3 Additionally, alternative mechanisms are considered, such as migration through connected pathways via the filler or other additives or connected pathways in the matrix due to its inhomogeneity.4

Is then the transport through the coatings possible via other pathways than connected pigment particles? The answer might be found in the polymer matrix itself, by analysing internal heterogeneity which might lead to formation of pathways for ions migration.5 Furthermore, screening pigment distribution in the polymer matrix by high-resolution 3D techniques can reveal additional connected pathways between the pigment particles.

Hopefully, we have shown that with comparatively simple data processing of the different spectroscopic analytical techniques, we can deliver substantially stronger interpretive results to support the development of better anti-corrosion systems. However, when putting presentations together this may look nice and simple, but the lack of integrated software solutions means that analysts need to be experts in at least five different spectroscopic data analysis packages to bring this story together. Even where the data are measured on a single high-vacuum instrument, the data handling is not integrated. The recreation of the 3D images, which is critical to follow the leaching of pigments, is also carried out independently of the acquisition software. A further challenge is that, currently, the reconstruction is both a time-consuming and subjective process. Work continues to improve the algorithms and no doubt the application of machine learning could remove the subjectivity. Hopefully, the objective data it is now possible to produce using advanced 3D spectroscopic techniques will provide quantitative input into the electrochemical modelling and help reduce the complex solution space they suffer from. Of course, in the perfect world, we would be able to carry out all the analyses in a single instrument—in real-time—and carry out the data interpretation using an integrated software suite… we can but dream!

You can learn more about analytical methods in corrosion science at the Electrochemical Methods in Corrosion Research (EMCR) conference being held from 22 to 27 July 2018 at Robinson College in Cambridge, UK. More information at http://emcrconference.org.

Part of this work was supported by the European Union’s Horizon 2020 research and innovation programme under the Marie Skłodowska-Curie grant agreement No. 706908.