Sampling takes place every day in everybody’s daily life. Consciously or unconsciously, we all take decisions regarding how to select and collect the things we need, be those vegetables or coffee in the supermarket, or material for academic research projects—with everything in between. Those who have been curious enough to reflect on everyday decision-making processes, discovered immediately that sampling decisions often make all the difference. This is why an incipient theory started to be elaborated. One individual, more brilliant than others, made a giant step forward in the evolutionary thinking on sampling and developed what became the Theory of Sampling (TOS); his name was Pierre Gy. We will dedicate a later column (maybe more) to focus on his life’s monumental achievements. This all started in the year 1950. Here below, with the experience gained over almost 70 years, we discuss cases both pro et contra TOS. Readers of earlier Sampling columns will readily understand why cases pro TOS can be marshalled, but will rightly wonder: why cases contra TOS? Well, it is time to stray a bit outside the strictly scientific and technical issues of sampling and make an attempt to understand why TOS is not universally accepted despite being universally applicable. Here we present and discuss various motivations for taking on, or not, representative sampling or embarking on a project replacing existing sampling systems that have been found faulty and non-representative. The very first column in this series framed the key issue squarely: What is the meaning of analysing a demonstrably non-representative sample? At the time the conclusion was straightforward: There is none! In spite of this impeccable logic, proponents of TOS still often meet arguments (of bewilderingly different sorts) why one should not involve TOS. It is illuminating to understand what are the drivers and arguments behind this surprising attitude. Stepping into what we think are the wrong shoes, trying to understand the fundamental reasons for the existence of a strong resistance to TOS is necessary, even if not sufficient on its own, to find a more effective and successful communication strategy to explain that sampling and representativeness are the two sides of the very same coin. Hence cases pro et contra TOS will be presented and discussed below.

A powerful case for TOS in trade and commerce

According to international trade agreements and codes, disputes between buyer and seller are to be pre-empted by duplication (or triplication) of primary samples, of which one is analysed by the buyer, the other by the seller. A third sample is sometimes archived to be used if disputes can only be resolved in a court of law. Sometimes a third party is called for who then either analyses the archival sample, or is asked to perform a completely new primary sampling + analysis. Usually the two analytical results from the buyer and seller are compared, and should ideally fall within a commonly agreed upon uncertainty interval, specified in the contract; the simple average value is then often used for the pertinent business purposes.

The interesting case is when analytical differences exceed this acceptance interval, in which case the trade codes mandate that the archival sample is forwarded to and analysed by a third, independent party, whose analytical result is sometimes used directly by fiat. If this is not acceptable to one or both parties, the dispute goes to arbitration in a court of law. This will in most cases then dictate to use the average between the two nearest of the three analytical values, upon which to conduct the salient business transaction. This arbitration approach appears logical and easy to follow, and is never questioned further—likely because there is always a guaranteed resolution.

However, there is a hidden elephant in the room!

There are very rarely sufficient stipulations on how the primary samples are to be extracted. Indeed, it is commonly accepted, albeit often tacitly only, that each party or stakeholder is free to use whatever sampling procedure they prefer. The focus is overwhelmingly on the magnitude of the final analytical results. It is thus acceptable that the seller and the buyer may wish to perform sampling independently, for example having the seller sample at the port of loading of a ship’s cargo, while the buyer samples the same cargo but upon arrival at the receiving port. This is so, because every pair, or every triplicate set, of primary samples is simply assumed to be fully representative of the cargo in question; lest the above arbitration rules fall apart. The crucial issue is that the dominating sampling error effects are invisible in the gamut of contractual stipulations—it is all about the analytical results, and perhaps, in the more thoughtful cases, also about the quality of the analytical determinations involved.

Sampling procedures for which TOS demands elimination of all bias-generating errors are not heeded (Incorrect Sampling Errors, ISE) will lead to biased sampling. This leaves the issue without control of the magnitude of the influence of the material heterogeneity. This will unavoidably lead to a significant inflation of the practical sampling variability, the more so the higher the lot heterogeneity. When one, or both, parties in an analytical dispute are not in compliance with the prerequisites for representative sampling, the empirical sampling variability is highly likely to be much larger than the commonly agreed upon contractual uncertainty interval (see Figure 1). This translates directly into a high probability that the analytical results from both parties cannot be resolved but will have to go to arbitration. This is the status quo for very many current international trade agreements, codes and contracts. The degree to which this scheme results in the need for arbitration is directly proportional to the inherent heterogeneity of the cargo involved, and to the degree of deviation from the principles that guarantee representative sampling. Cargoes with a small heterogeneity will rarely experience a need for arbitration, but as cargo heterogeneity goes up so will the number of cases in which comparable analytical results are not observed. 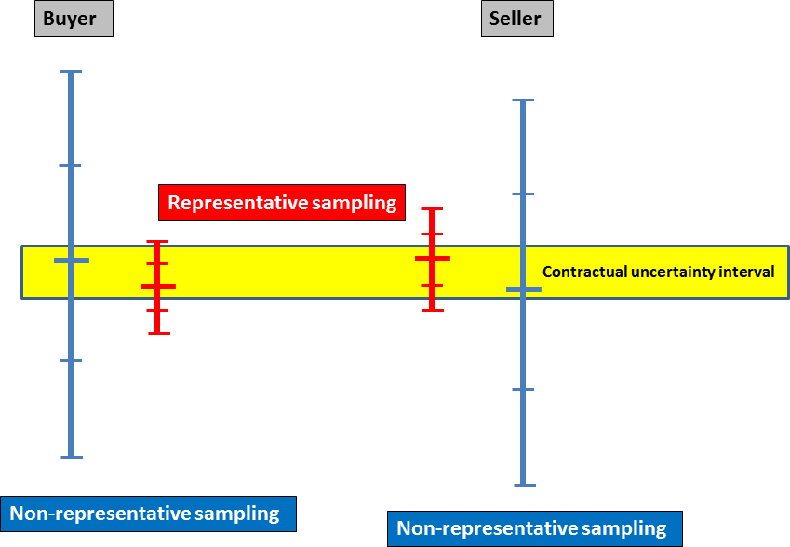 Figure 1. The consequences of non-representative sampling are identical for buyer and/or seller—an inflated sampling variability (blue) making it very difficult to be able to satisfy the contractual uncertainty interval (yellow). Things get completely out of control when both buyer and seller, and even a third arbitration party, may choose their own sampling procedure freely. Resolution of the analytical result comparison issue is only possible when all parties agree only to use representative sampling procedures (red).

The key feature here is that the degree of heterogeneity of the lot or material, as sampled by the specific procedure in use (representative or not), is the real determinant w.r.t. the magnitude of the analytical results—not the aptitude of the analytical laboratories involved. Usually analytical errors are very well under control (TAE)—indeed these are practically always neglectably small compared to the dominant total sampling errors (TSE). This means that there will never be a bona fide common basis upon which to evaluate the magnitude and the significance of the difference between any two, or three, analytical results in all resolution efforts. As long as there is no agreement or contract that legally demands representative sampling, there will never be an objective basis, nor a rational treatment of analytical disputes. This is unfortunately the status quo in nearly all cases.

For both buyer and/or seller the consequence of non-representative, i.e. biased, sampling is a fatally inflated sampling variability (blue), compared to unbiased procedures (red); see Figure 1. Only these representative procedures are able to deliver a minimum sampling uncertainty that can be compared to the contractual uncertainty interval (yellow). Things get really out of control if/when buyer and seller, and/or an arbitration agency, can freely choose their own sampling procedure etc. There is only one way out of this hidden enigma not comprehensively recognised in current trade agreements and codes—all sampling must be representative, i.e. compliant with the Theory of Sampling (TOS), for example as codified in the international standard DS 3077 (2013).

The mind boggles when it is realised that a single sentence is able to rectify the fatal quagmire outlined above, a sentence that just need to be included in all contracts forthwith when issues of sampling are on the agenda:

“All sampling procedures invoked to secure primary samples (as well as all sub-sampling operations needed to produce the analytical aliquot), whether by buyer, seller or an arbitration agency, shall be compliant with the principles of representative sampling as laid out by the Theory of Sampling (TOS), as codified in the standard DS 3077 (2013); all sampling procedures must be adequately and fully documented.”

Figure 2. An attempt to design a dedicated “conveyor belt sampler”, intended to sample from a falling stream of particulate matter. Conveyor belt (top), continuing screw feeder (bottom). In between, a hopelessly inadequate scoop sampler incurring significant IDE (Increment Delineation Errors, IDE) as well as manifest IME (Increment Materialisation Errors). This scoop is totally unable to supply a continuous cross-slice of the moving stream of matter, and will manifestly be subject to severe overflow. In spite of a critical sampling audit, this sampler is still in use: “There is no room to install a replacement sampler”—QED.. 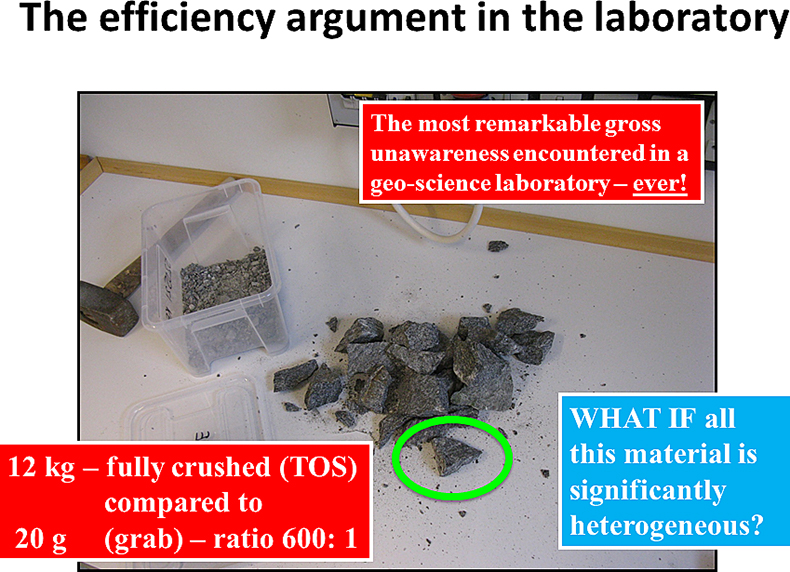 Figure 3. Scene from a geo-science analytical laboratory (sample preparation front room). The full content of the white plastic container (left), a carefully collected composite sample (12 kg), is in the process of being coarse-crushed in a study aimed at illustrating the value of proper TOS procedures in the laboratory steps of the complete “from-field-to-aliquot” pathway. Unbelievably, an authoritative laboratory stakeholder suggested, with conviction and strength: “It is not necessary to go such lengths as to crush all this material (for each field sample)—just pick and crush a ‘suitable fragment’ of the mass commensurate with the subsequent fine-crushing capacity (20 g)—this saves a lot of work!” This statement encapsulates the wide-spread work efficiency argument to the extreme, combined with blatant neglect of the main characterisation of rocks: heterogeneity—alas with catastrophic results in the form of a 1/600 reduction of the coverage of the significantly heterogeneous material. “Luckily” (in fact not by luck alone...), the laboratory student assistants were well trained wrt TOS and rejected this proposal firmly.

Many more illustrative statements can be marshalled, all in the same tune: anything but representativity is considered acceptable drivers for sampling! Obviously, if the reader has been with the authors in all columns so far, this state-of-affairs cannot be more wrong, however.

The last 15 years has seen an explosion of achievements within all of the above areas, at all levels from the very first awareness of a need for TOS… to whole textbooks; in the latter category alone at least three are in production at the time of writing. But less will also do, even much less. Here follows a selection of easily available sources from which to educate oneself in all matters re. TOS (all of which also refer to more in-depth sources).