The costs of hidden bacteria: challenges for representative sampling and measuring bacterial loads in an industrial slaughterhouse

Full-Text PDF
The costs of hidden bacteria: challenges for representative sampling and measuring bacterial loads in an industrial slaughterhou

The European Union has adopted an integrated approach to food safety, termed “from farm to fork”, by providing independent scientific support and advice on food safety-related aspects of Campylobacter. Chicken meat is responsible for 20–30 % of all cases of gastroenteritis, while 50–80 % of the cases can be related to chicken reservoirs of bacteria. There exists a Process Hygiene Criterion (PHC) of the European Commission Regulation 2017/1495 of 23 August 2017,1 amending Regulation (EC) No. 2073/2005 for Campylobacter spp. The objective of the PHC is to control contamination of chicken carcasses during the slaughtering process through monitoring and taking corrective actions when the mandated targets are breached. Satisfactory monitoring results (EU PHC criterion: 1 January 2020) means that, after chilling, no more than 15 out of 50 sampled carcasses may have counts above 1000 Colony Forming Units per g. If this criterion is exceeded, improvements have to be made to the whole production line, i.e. taking appropriate biosecurity actions from the farms to a review of process controls in the slaughterhouse. 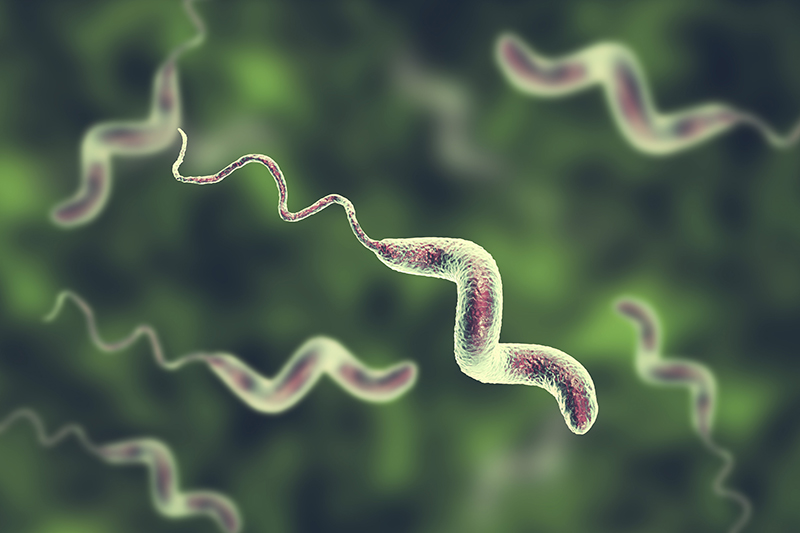 It all starts with representative sampling

How can the basics of sampling, as formulated in Theory of Sampling (TOS), be introduced in the field of microbiology? Measuring is knowing, and it all starts with representative sampling. In the Netherlands alone, 1.7 million chickens are slaughtered and processed every day. For a slaughterhouse capacity of 250,000 chickens a day, the mandatory checking rule for Campylobacter spp. of 50 carcasses sampled per week corresponds to a sample frequency of only 0.004 %. With such an extremely low sampling coverage the primary sampling must be totally reliable, so TOS-compliant sampling procedures are an absolute must. And when test samples are indeed fully representative, analysis procedures have to be likewise; the latter is “easy” to accomplish especially compared to the sampling tasks.

Microbiological analysis is performed by the gold standard of culturing microbes in Petri dishes. This time-honoured method has been used since 1886 following a publication by Theodor Escherich (Escherichia coli bacteria were named after him). Following this publication, along with the paradigm of the famous microbiologists Pasteur and Koch, only pathogenic bacteria have been cultured and examined.

However, a dramatic turning point came in 2005, when Eckburg, based on 16S rRNA sequence analysis, discovered hundreds of completely unknown bacterial species in the human digestion tract, exceeding even the most common culturable species in number. From this moment, culturing bacteria on Petri dishes has been criticised as “the great plate count anomaly”. This standard method for bacteria detection in fact detects only 1 % of all bacteria.2

Thus, the “Total Plate Count (TPC)” no longer corresponds at all to the real microbial populations of interest.3–5 Despite this serious proviso, the Petri dish culturing method is still used as the pragmatic choice in the food industry.

When Campylobacter is cultured, it has to be done under very special conditions [micro-aerophilic and capnophilic atmosphere (5 % O2, 10 % CO2, 85 % N2) at 41.5° C] on a specific plate that inhibits growth of other bacteria. The focus is on culturing Campylobacter jejuni, (C. jejuni) and Campylobacter coli (C. coli). However, this excludes other Campylobacter strains, such as C. concisus and C. foetus, which are responsible for many cases of gastroenteritis in the elderly.

The most important problem of the anomaly of the culturing method is it misses the viable-but-not-culturable (VBNC) cells. These bacteria are induced to temporarily stop reproducing, though they may become virulent in another, more favourable environment. In practice, this means that chicken meat may well test negative for Campylobacter at the control platform in the slaughterhouse, while testing positive at the retail level. These emerging and still not fully understood VBNC characteristics pose a serious risk to human health.

A possible drawback of cleaning is an activation of genes resistant to chemical disinfectants, including chlorinated products. To make matters even more complicated, these genetic changes have also been found to promote resistance to a broad spectrum of antibiotics. This is the emerging, and potentially disruptive, problem of Multi-Drug Resistant Campylobacter.

The slaughterhouse provides multiple niches for reservoirs of all kinds of Campylobacter spp. Campylobacter exhibits great genetic diversity, finding different genotypes during processing in the slaughtering line. Culture-independent analyses, like multilocus sequence typing (MLST) and whole-genome sequencing, are uncovering the mechanisms of survival of Campylobacter bacteria.6 This study is an example of how the boundaries and definitions of genetics are continuously evolving in the new era of post-genomic microbiology. The amount of novel microbial genomic information that is being generated on a daily basis is now so vast that multidisciplinary approaches, which integrate bioinformatics, statistics and mathematical methods are required to assess it effectively. All these challenges necessitate a highly targeted approach to representative sampling working closely with microbiological analysis. However, today, we are very far from this goal.

Modern genomics has revolutionised every aspect of microbiology. There is an urgent need for new rapid and reliable microbial detection techniques in all relevant sectors of life science and, especially, in the food industry. Microbiology is extremely complicated, but it all starts with proper sampling. A useful point of departure regarding food and feed was described in Reference 7, with a special focus on considerations with respect to water analysis.8 The future for required innovations is challenging and there is good reason to be cautiously optimistic, however, there are threats looming at the horizon, especially as multi-drug resistant (MDR) bacteria proliferate at a rapid pace.

Campylobacteriosis is the most commonly reported zoonosis disease (one which can be transmitted to humans from animals) with an increasing trend in the European Union. The impact of disease in people is conventionally quantified in non-monetary terms, usually in the form of what is called a “disability-adjusted life year” (DALY)—whereas losses due to disease in animals, particularly livestock, are quantified in monetary terms.9 As an example, in the Netherlands, the burden of disease in terms of DALY is calculated as 1200 DALYs per year.10 The EFSA11 calculated the costs of campylobacteriosis for public health systems and for lost productivity in the EU at approximately €2.4 billion per year (whether animal losses are included is unclear). Worldwide, campylobacteriosis is estimated to cause 500 million disease cases in human society. What are the economic costs of this societal burden? How to break down such estimates on national levels?

Even approximate costs for all the industrial interventions and scientific research needed are hard to estimate. However, from a socio–economic perspective it is critically important to understand the interactions between the sectors of microbiota, animal welfare and pathogenesis in humans. There is so much more to do here—and working towards a better economic cost calculus is very high on the agenda, so that this aspect cannot be ignored in societal reckoning. Human diseases that can be prevented, as well as unnecessary deaths, are much too important!

This will get us nowhere if there is no representative sampling. The application of the TOS for the complex sampling of bacteria in the large-scale meat industry from chicken farm to slaughterhouse is challenging, however, it offers the possibility for profitable cooperation between the basic principles of the TOS and microbiology! 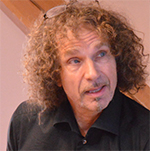 My name is Abel Arkenbout (MSc), toxicologist educated at the University of Utrecht, the Netherlands. In the nineties, I developed educational programmes for the Ministry of Health on transmissible diseases and the risks of illegal drugs markets. Together with a team, I set up a consultancy for information and education on these topics in Amsterdam, which has now become a national advisory body. As a scientist, I develop crowd-based and funded research programmes together with my colleagues, since 2013 for the ToxicoWatch foundation. This concerns biomonitoring projects on Persistent Organic Pollutants (POPs) such as dioxins (PCDD/F), dl-PCBs, SCCPs and PFAS related to waste incineration. In our multi-year biomonitoring studies, we use vegetation (mosses, pine needles and leaves) and eggs from backyard chicken as relevant biomarkers. With the help of innovative analytical bioassays like the DR CALUX, FITC-T4 and PFAS CALUX, POPs in the environment can be detected in the small quantities of picograms. ToxicoWatch Consultancy focuses more on the analytical challenges in microbiology and investigates the potential of microbial degradation of Persistent Organic Pollutants.
[email protected]