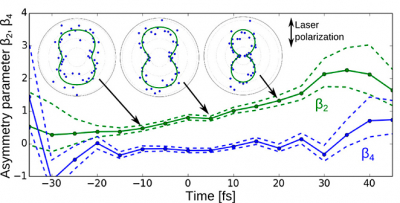 Using time-, energy- and angular-resolved photoelectron imaging a team of researchers from the Max Born Institute in Berlin, in collaboration with colleagues from Milan and Padova, has been able to make snapshots of coupled Rydberg orbitals evolving in time during an ultrafast autoionisation process.

Electronic autoionisation is a process in which multiple electrons in an excited atom or molecule rearrange in order to “kick out” one of them. Notwithstanding its long research history, the theoretical description of this phenomenon still meets with significant challenges, especially in cases where several electronic autoionising resonances overlap. These challenges are fundamental, since most of the theories approach the inherently time-dependent autoionisation process from an energy-domain perspective, thanks to the prevailing experimental information that is collected in the energy domain. However, recent advances in ultrafast laser spectroscopy and, especially, the generation of ultrashort XUV pulses, allowed the researchers to look at autoionisation in nitrogen molecules on its natural time scale.

In a recent publication in Phys. Rev. Lett., the experimental team has used a newly constructed XUV time delay compensating monochromator beamline to excite one of the complex autoionising resonances in a nitrogen molecule. In the femtosecond pump-probe experiment, a second time-delayed infrared (IR) laser pulse was able remove the electron from the excited orbitals before the autoionisation had a chance to take place, i.e. at a timescale of less than 15 fs. The resulting photoelectrons were detected using a Velocity Map Imaging spectrometer, which delivers both energy- and angular-resolved distributions of photoelectrons. The analysis of the angular distributions, which gives direct information about the shape of the involved electronic orbitals, showed that the photoelectron emission angles change within the lifetime of the resonance (see illustration). Immediately after the excitation, the emission is more or less isotropic, i.e. the electrons are emitted with equal probability in all directions. However, with increasing pump–probe time delay, the electrons more and more tend to fly out in the direction of the laser light polarisation. This observation can only be understood, if one assumes that two different electronic states with substantially different lifetimes are simultaneously probed by the IR pulse. The existence of these two states was indeed predicted by theory more than 30 years ago. The present experiment gives the first confirmation of this old prediction.

The two overlapping electronic states with long and short lifetimes observed by the team suggest a role for the phenomenon of interference stabilisation, previously suggested in the field of laser-dressed atoms and in atomic Rydberg physics. In the framework of this theory two overlapping resonances influence each other in such way that one of the two becomes stabilised at the expense of the other. Quantum interferences lead to a counterintuitive effect: the stronger the resonances interact, the more one of them is stabilised. The present work draws parallels between these interference phenomena in laser-dressed atoms and in molecular autoionisation. It is hoped that further experimental and theoretical research will shed light on how general this phenomenon is and will help to achieve a new level of understanding of autoionisation dynamics.