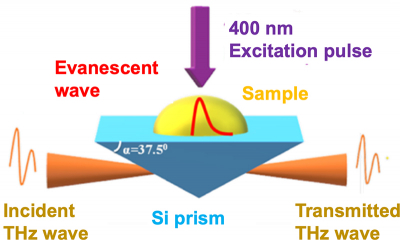 A team of researchers from Osaka University, in cooperation with Tokyo Institute of Technology, have directly observed charge transfer and intermolecular interactions in artificial photosynthesis that occurs on a ps scale. With time-resolved attenuated total reflection (TR-ATR) spectroscopy in the terahertz (THz) region, they revealed the process of artificial photosynthesis material [Re(CO)2(bpy) {P(OEt)3}2](PF6) in Triethanolamine (TEOA) solvent as a reductant. Their research results were published in Scientific Reports.

Because the use of THz waves reveals changes in intermolecular vibrations, one to observe how TEOA molecules around the Re complex move and how electron transfer occurs. However, since most solvents used in photocatalytic studies have a high absorption intensity in the THz region, it is difficult to observe Re in TEOA solvent. Thus, the team combined ATR spectroscopy and THz time-domain spectroscopy to carry out TR-ATR in the THz region (Figure 1).

In addition, in order to conduct the ultrafast time-resolved measurements, they combined pump probe spectroscopy with TR-ATR, observing how TEOA molecules moved and how electron transfer occurred on a ps-scale timescale during a photocatalytic reaction. In the pump probe spectroscopy experiment, a pump pulse with the wavelength of 400 nm excited a sample and then a probe pulse (THz pulse) was used for probing the sample after an adjustable delay time. As a result, they were able to reveal the intermolecular vibrational mode with a three-step relaxation process on a picosecond timescale after photo-excitation: 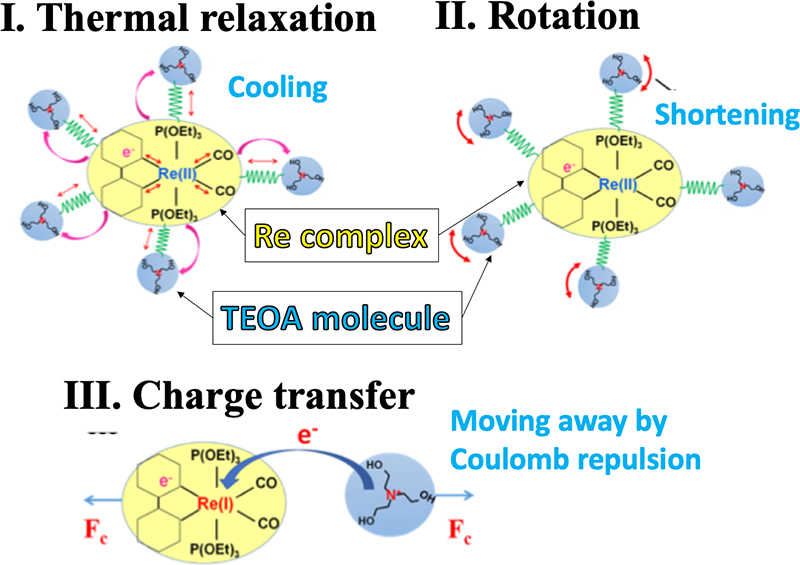 Figure 2. The schematic figures of the temporal evolution from I to III of the interaction between photocatalyst [Re(CO)2(bpy){P(OEt)3}2]+ as a photocatalyst and TEOA molecules as reductants. Credit: Osaka University

Professor Kimura from Osaka University says, “The use of THz light allows us to observe the role of the reductant in photocatalytic reaction. TR-ATR spectroscopy in the THz region will help to develop highly efficient photocatalytic reactions. The observation of the relative motion between two molecules and charge dynamics by spectroscopy will assist research on various reaction processes in the fields of biology and chemistry.”