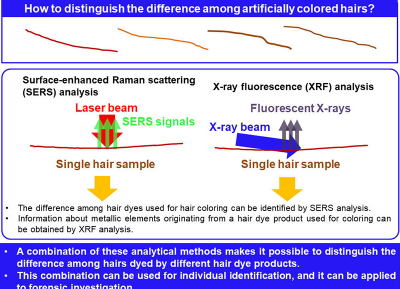 A single strand of hair in a crime scene contains many clues that can help identify a perpetrator. In a recent study, scientists at Tokyo University of Science, Japan, have combined surface-enhanced Raman spectroscopy and X-ray fluorescence to distinguish between differently dyed individual hair strands. Both these techniques are almost non-destructive and can be conducted with portable devices, making this a promising way to get supportive evidence in forensic investigations.

In crime scene investigations, a single strand of hair can make a huge difference in the evolution of a case or trial. If a fallen strand of hair with root cells attached is found, a DNA test can reveal the identity of a criminal; unfortunately, this seldom happens. Even though other types of DNA analysis can be conducted using the mitochondrial DNA embedded in the hair shaft itself, such tests are not sufficient to reliably identify a person and usually call for additional evidence.

In a recent study published in Analytical Sciences (doi.org/fm4m), scientists at the Tokyo University of Science developed a strategy for identifying criminals from a single strand of hair, leveraging the fact that hair dyes are becoming increasingly common. Their approach involves finding out if two individual strands of hair belong to the same person based on the composition of hair dye products found on them using SERS and XRF analysis.

The scientists conducted SERS and XRF analyses using portable devices to see if they could distinguish between single strands of hog hairs dyed with different products. Associate Professor Shinsuke Kunimura, who led the study, explains why both analytical methods had to be used in combination. “SERS can easily detect the overall differences in composition between different types of hair dyes, such as permanent, semi-permanent or natural dyes. However, it is not enough to distinguish between hair colouring products that contain or produce similar dyes. To do this, we also relied on XRF analysis, which can detect the presence of metallic elements used in the ingredients of hair dye products.” Using both techniques, the scientists were able to easily distinguish between five different dyes applied to individual strands of hog hair.

Because both analytical methods used are almost non-destructive, the strategy proposed in this study could be used to quickly analyse hairs found in crime scenes on-site before they are sent for DNA analysis. “Our approach provides supportive information for more reliably identifying whose hair was found in a crime scene”, remarks first author Momona Horiguchi. “This could help us clarify if someone is a criminal, meaning that our methodology could greatly contribute to forensic investigations.”

Single molecule detection in gas-, solid- or liquid phases possible with slippery SERS
29 December 2015
SERS Study to look at Pesticides In and On Fresh Produce
11 December 2015