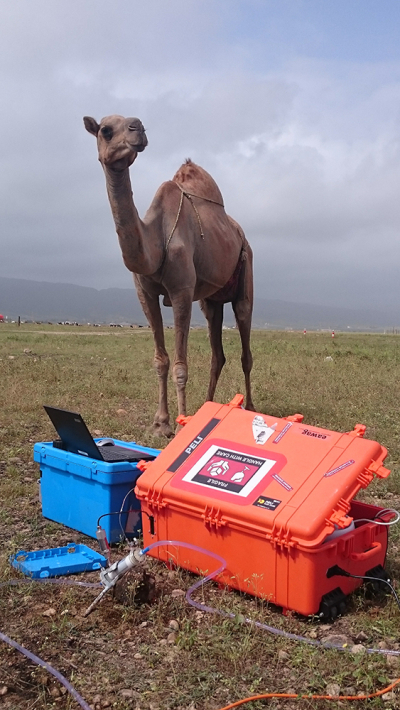 A portable mass spectrometer, developed by scientists from EAWAG, the Swiss Federal Institute of Aquatic Science and Technology, weighs 13 kg and is mounted in a wheeled suitcase. It can operate autonomously, providing continuous measurements of a wide range of gases; long-term operation is also possible. The instrument is described in a paper in Environmental Science & Technology.

For example, the EAWAG team took two weeks to complete a groundwater analysis project in Australia. With conventional methods and instruments, EAWAG environmental physicist Matthias Brennwald estimates the team would have required about six years in the lab.

The precision of the new system’s measurements is high, with an analytical uncertainty of 1–3% (cf. 1–1.5% for a lab-based spectrometer). Other advantages offered by the system are its low power consumption (50 W) and maintenance-free operation.

Now, two years after the instrument was first deployed, eight more instruments are in use—a total of five at EAWAG and four at the Universities of Geneva and Tübingen and the Mont Terri rock laboratory. Following numerous enquiries, it was decided to establish a spin-off. Since April, the spin-off company Gasometrix has been producing the instruments commercially. Their first client is the University of Oxford.