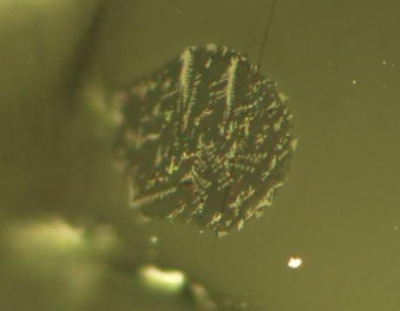 Fire fountains, a type of eruption that occurs frequently in Hawaii, require the presence of volatiles mixed in with the erupting lava. Volatile compounds turn into gas as the lavas rise from the depths. That expansion of that gas causes lava to blast into the air once it reaches the surface, a bit like taking the lid of a shaken bottle of fizzy drink.

“The question for many years was what gas produced these sorts of eruptions on the Moon”, said Alberto Saal, associate professor of earth, environmental, and planetary sciences at Brown and corresponding author of the new research. “The gas is gone, so it hasn't been easy to figure out.”

The research, published in Nature Geoscience, suggests that lava associated with lunar fire fountains contained significant amounts of carbon. As it rose from the lunar depths, that carbon combined with oxygen to make substantial amounts of CO gas. That CO was responsible for the fire fountains that sprayed volcanic glass over parts of the lunar surface.

For many years, the Moon was thought to be devoid of volatiles like hydrogen and carbon. It was not until the last decade or so that volatiles were definitively detected in lunar samples. In 2008, Saal and colleagues detected water in lunar volcanic beads. They followed that discovery with detections of sulfur, chlorine and fluorine. While it became apparent that the Moon was not completely depleted of volatiles as was once thought, none of the volatiles that had been detected were consistent with fire fountain eruptions. For example, if water had been the driving force, there should be mineralogical signatures in recovered samples. There are none.

For this research, Saal and his colleagues carefully analysed glass beads brought back to Earth from the Apollo 15 and 17 missions. In particular, they looked at samples that contained melt inclusions, tiny dots of molten magma that became trapped within crystals of olivine. The crystals trap gases present in the magma before they can escape.

Although other volatiles were previously detected in the lunar volcanic glasses and melt inclusions, the measurement of carbon remained elusive due to the high detection limits of the available analytical techniques. Erik Hauri from Carnegie Institution for Science developed a state-of-the-art ion probe technique reducing the detection limits of carbon by two orders of magnitude. That allows a measurement of as low as 0.1 ppm.

“This breakthrough depended on the ability of Carnegie’s NanoSIMS ion probe to measure incredibly low levels of carbon, on objects that are the diameter of a human hair”, said Hauri. “It is really a remarkable achievement both scientifically and technically.”

The researchers probed the melt inclusions using secondary ion mass spectroscopy (SIMS). They calculated that the samples contained initially 44–64 ppm of carbon. Having detected carbon, the researchers devised a theoretical model of how gases would escape from lunar magma at various depths and pressures, calibrated from the results of high-pressure lab experiments. The model had long been used for Earth. Saal and colleagues changed several parameters to match the composition and conditions affecting lunar magma. The model showed that carbon, as it combines with oxygen to form CO gas, would have degassed before other volatiles.

“Most of the carbon would have degassed deep under the surface”, Saal said. “Other volatiles like hydrogen degassed later, when the magma was much closer to the surface and after the lava began breaking up into small globules. That suggests carbon was driving the process in its early stages.”

In addition to providing a potential answer to long-standing questions surrounding lunar fire fountains, the findings also serve as more evidence that some volatile reservoirs in the Moon’s interior share a common origin with reservoirs in the Earth, the researchers say.

The amount of carbon detected in the melt inclusions was found to be very similar to the amount of carbon found in basalts erupted at Earth’s mid-ocean ridges. Saal and his colleagues have shown previously that Earth and the Moon have similar concentrations of water and other volatiles. They have also shown that hydrogen isotope ratios from lunar samples are similar to that of Earth.

If volatile reservoirs on the Earth and Moon do indeed share a common source, it has implications for understanding the Moon’s origin. Scientists believe the Moon formed when Earth was hit by a Mars-size object very early in its history. Debris from that impact accreted to form the Moon.

“The volatile evidence suggests that either some of Earth’s volatiles survived that impact and were included in the accretion of the Moon or that volatiles were delivered to both the Earth and Moon at the same time from a common source—perhaps a bombardment of primitive meteorites”, Saal said.