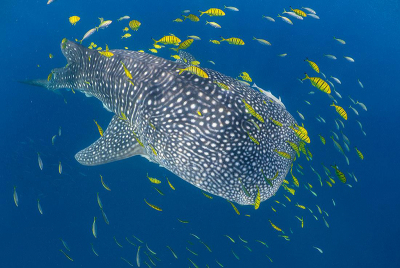 Isotope ratio mass spectrometry has shown that whale sharks, the world’s largest fish, roam less than previously thought. Local and regional actions are vital for the conservation of this globally endangered species moving forward, according to a new study by researchers from the Marine Megafauna Foundation, University of Southampton and Sharkwatch Arabia.

Previously, genetic research indicated that whale sharks mixed within distinct populations in the Indo-Pacific and Atlantic Ocean, respectively. This new study used stable isotope analysis to demonstrate that whale sharks feeding at three disparate sites in the Western Indian Ocean (Mozambique and Tanzania) and the Arabian Gulf (Qatar) rarely swim more than a few hundred kilometres north or south from these areas.

“Whale sharks are amazing swimmers, often moving over 10,000 km each year, and they can dive to around 2000 m. Biochemical studies tell us more about where they go and what they do when they’re out of our sight”, said Dr Clare Prebble, who led the research as part of her PhD project at the University of Southampton.

Ratios between the heavier and lighter isotopes of nitrogen and carbon vary naturally across different habitats in the marine environment. For example, more of the heavier isotopes are found in near-shore environments than offshore. These ratios stay consistent as they are passed up through the food web and therefore provide a record of the animal’s feeding and movement behaviours.

Electronic tags are commonly used with marine animals to record their movements and diving behaviours. However, the challenge of keeping them attached to a large shark, while minimising disturbance, has meant that only short-term deployments (weeks to months) have been possible. This study used tiny samples of skin tissue from wild, free-swimming whale sharks. These small pieces of skin, collected over two to three years at each location, were sufficient to reconstruct the sharks’ movements and feeding preferences over the weeks and months prior to sampling.

Values of both carbon and nitrogen stable isotopes differed at each site. To complement the biochemical analysis, the researchers also took photographs of the natural markings on each whale shark to identify and track individuals over a 10-year timeframe. Every whale shark has a unique spot pattern, similar to a human fingerprint. The team recorded 4197 encounters with 1240 individual whale sharks within these three countries.

Only two sharks moved between sites, both swimming around 2000 km north from Mozambique to Tanzania. Taken together, these findings indicate that there are limited movements between these major aggregation sites over months to years. These results have implications for the conservation of this endangered species.

“The best data available suggests that more than half of the world’s whale sharks have been killed since the 1980s. Although the Western Indian Ocean remains a global hotspot for the species, even the largest feeding areas only host a few hundred sharks. Our results show that we need to treat each site separately, and ensure good conservation management is in place, as the sharks may not re-populate if they’re impacted by people’s activities”, Prebble added.

The study stresses the need to protect these filter-feeding sharks at the areas where they come together in numbers, particularly where human pressures are also present. Whale sharks are an incidental catch in coastal gillnets, which are frequently used in Mozambique and Tanzania. The Arabian Gulf is a huge oil shipping area where vessel strikes pose a major threat to the sharks when they are feeding near the surface.

Their findings are published in Marine Ecology Progress Series.

XRF and Isotope MS for Evaluating Ancient Coins
26 May 2010