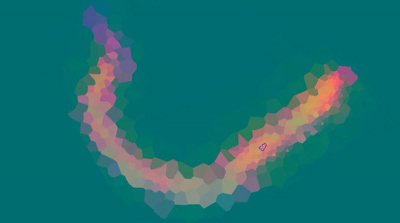 Researchers from Caltech, UC Berkeley and the Berkeley Synchrotron Infrared Structural Biology Imaging Program (BSISB) have reported a more efficient way to collect “high-dimensional” infrared images. With the new method, scans that would have taken up to 10 hours to complete can now be done in under an hour, potentially broadening the scope of biological spectromicroscopy to time-sensitive experiments.

“We realised that sampling our model organism—the small roundworm C. elegans—as it changes over time was challenging for software rather than hardware reasons”, said Elizabeth Holman, a graduate student in chemistry at Caltech. “For example, image sampling was limited to uniform-grid raster scans with rectangular boundaries and fixed distances between sample points.”

The new technique, implemented at the ALS with Yuan-Sheng Fang, a graduate student in physics at UC Berkeley, uses a grid-less, adaptive approach that autonomously increases sampling in areas displaying greater physical or chemical contrast. In the proof-of-concept infrared microscopy experiments, the researchers examined two samples.

The first was a two-component system in which both components (permanent-marker ink and high-vacuum grease) were well characterised. Details of the sample were very difficult to see clearly with the naked eye, so it was a good test of how the software would perform with minimal guidance from a human experimenter. The second sample was a live, larval-stage C. elegans, a biological model system studied by thousands of researchers.

“Outside of our specific published work, the results suggest that integrating AADA into existing scanning-based satellite, drone and/or microscope techniques can facilitate research in fields ranging from hyperspectral remote sensing to ocean and space exploration”, said Holman.