The School of Chemistry at Leeds University provided an ideal venue for the 2010 Royal Society of Chemistry NMR Discussion Group Postgraduate meeting. This one-day conference has now become an annual event, comprising talks and posters presented by early career researchers, giving them an opportunity to showcase their research in a friendly and informal atmosphere. On this occasion, overview presentations were also given by leading experts in their fields. Delegates included established scientists and group leaders from both academia and industry, providing a supportive and stimulating environment for all those presenting. 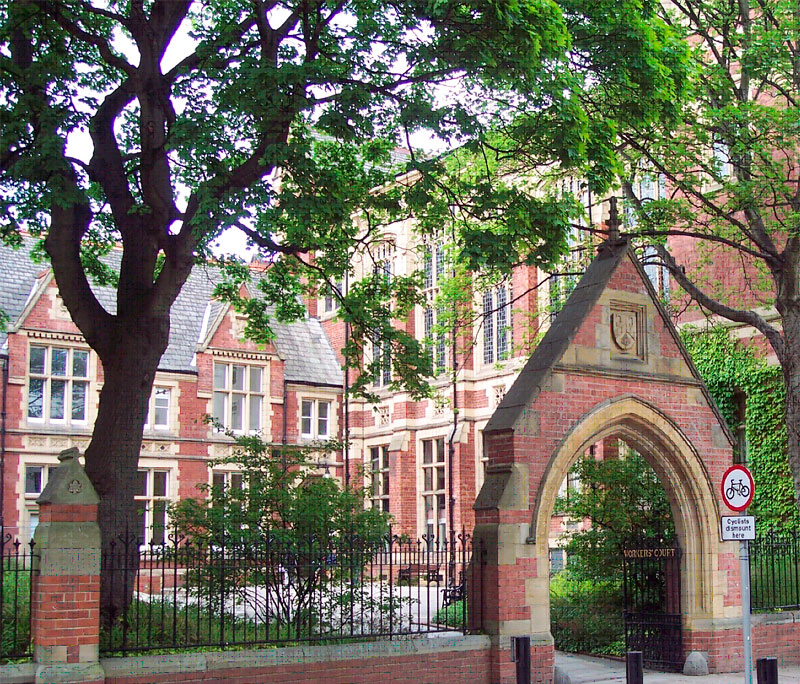 Paul Hodgkinson of Durham University opened the morning session with a tutorial lecture providing an overview of current solid-state NMR and applications. The fundamental differences between solution-state NMR and solid-state NMR were discussed, with illustrations of how information concerning structure and dynamics can be obtained from solid-state NMR. In particular, the role of computational chemistry to connect NMR data and structural information from diffraction based techniques was highlighted. Continuing the theme of solid-state NMR applications, Jonathan Bradley of Warwick University described how 1H double quantum build-up curves from double-quantum filtered correlation spectra could provide reliable determination of H—H distances. This was demonstrated for γ-indomethacin, where the spectra comprise many overlapping signals.

Jan Novak of Birmingham University provided an account of how magnetic resonance imaging could be used to study chemical waves under flow. In this case, the visualisation of chemical waves propagating through a series of Taylor vortices was demonstrated using NMR velocity and diffusion maps. This was voted the best oral presentation by a panel of judges from the NMR DG committee, and Jan was awarded prizes of £100, a bottle of champagne and an engraved Jeol medal, all provided by sponsors Jeol UK . 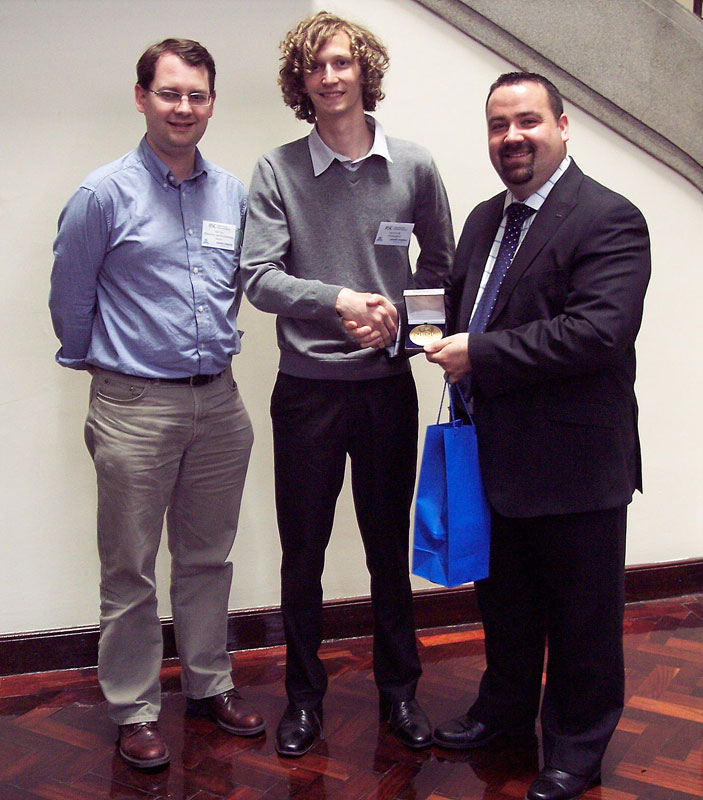 Catherine Cropper of Liverpool University described her work on NMR studies of Ionic liquids confined in mesoporous silica. Such substrates are of current interest and have many potential applications, including phase transfer catalysis. Catherine used solid-state and high-resolution magic angle spinning NMR spectroscopy to analyse the changes in dynamics and thermodynamic properties of encapsulated room temperature ionic liquids, to show a dependency of dynamics on loading level and nature of porous support. Catharine Jones of Bristol University continued the session with a presentation concerning derivation of inter-proton distances from nuclear Overhauser effect data for both rigid and flexible systems. A method used to derive inter-proton distances from either one-dimensional or two-dimensional NMR data was presented, using strychnine as a model system. Despite literature ambiguities, it was shown that the r-6 relationship holds for flexible small molecules, where internal motions are faster than the overall molecular tumbling. Alexandria Rogerson of Manchester University is using diffusion-ordered spectroscopy (DOSY) in her research, and gave a presentation to show how this approach could distinguish between components of commercially available mixtures of acetylglycerols. “Monoacetin” comprises six structurally similar components and four distinct diffusion coefficients were easily identified from a complex 1H NMR spectrum of the mixture. Approximately 90% of the spectrum could be assigned using DOSY data alone and this was supported with use of homo and heteronuclear two-dimensional experiments to give an almost complete assignment of all signals.

After an extended lunch and mixer session, with an opportunity to view a wide range of posters, Mike Williamson of Sheffield University opened the afternoon programme with the second overview lecture. Mike gave a retrospective account of his career in research, whilst sharing his thoughts about what he might have done differently “if he knew then what he knows now”. In summary, he emphasised the importance of luck and value of persistence with wide ranging interests. Theodoros Karamanos of Leeds University continued the session with a description of the structural determination of the dimeric apo-zitB cystoplasmic domain. Theodoros provided an account of how the use of residual dipolar couplings provided information about the symmetry axis between two monomers without use of nOe assignments. On this basis a preliminary structure was reported, having many common features with proteins belonging to the same family, to provide a route to efficiently calculating the full high-resolution structure. Judy Fonville of Imperial College then presented the novel use of full-resolution J-resolved projections in metabonomics and emphasised the use of peak alignment for good statistical correlations and multivariate models. Also, “binning” or grouping of spectral points for statistical analysis was discouraged, since limitations on information recovery are pronounced. The use of J-resolved projections for biomarker analysis was demonstrated, with increased peak dispersion and improved interpretation. However, quantification was not sufficient for use in regression spectroscopy. Ying Chow of Cambridge University described her work involving the use of NMR to study collagen matrix growth in cell cultures. The systems are extremely complex and initial studies showed that translational modification of proline was not always carried out. 15N labelled model collagen peptides have been synthesised and NMR work is being used to identify fingerprints of collagen structural motifs. Such information will enable characterisation of collagen matrix syntheses with greater precision.

A panel of judges from the NMR DG committee awarded a prize of £50.00 to Hannah Davies of Liverpool University for the best poster presentation. Hannah is using solid-state NMR to study the structure of ordered protein fibrils involved in amyloid diseases. Ultimately, studies of this nature may lead to pharmaceutical treatments to inhibit aggregation. Work is in progress to determine which residues are responsible for a transition between β-sheet arrangements in medin derived peptides and subsequently identify target sites for small molecules to inhibit aggregation. 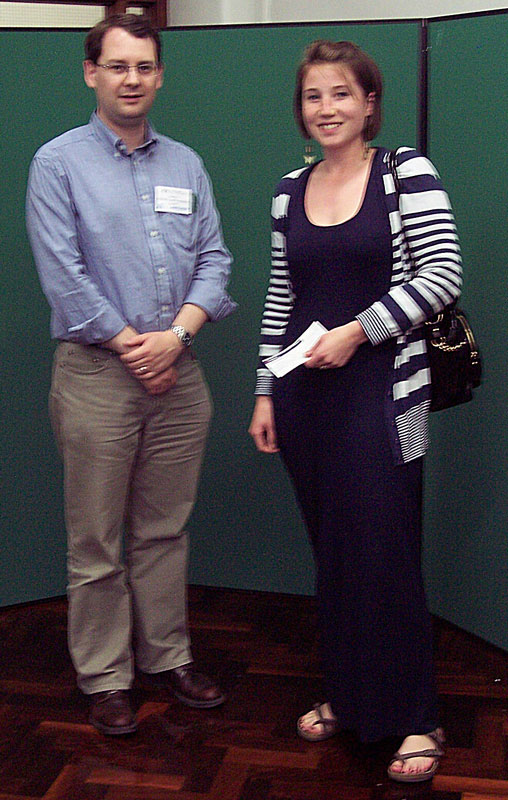 The NMR DG committee would like to thank Julie Fisher and her research group at the School of Chemistry, Leeds University, for excellent local arrangements, in addition to all those who participated on the day, making it such a success. We would like to acknowledge the generous sponsorship provided by Jeol UK.

The 2011 Postgraduate meeting will be held at the University of Birmingham on 22 June. For further details, contact Stephen Byard at [email protected]