One of the aims in the forensic analysis of physical evidence is to compare a questioned material from a crime scene with a specific reference, for example from a suspect, to determine whether the two samples are indistinguishable. The examination of coloured materials such as inks and fibres falls into this category and presents a significant challenge to the forensic analyst who must determine whether the particular shades exhibited by the pair of samples may be discriminated or not.

There are two issues to be addressed in selecting the best technique for such work. First, how destructive of the sample is that analytical procedure, and second, is the comparison based on a quantitative interpretation of the data with objective criteria for the discrimination threshold? On this basis, the use of UV/vis spectroscopy has much to recommend it for the forensic examination of inks and fibres, though thin layer chromatography (TLC) is also widely used as a complementary method in both cases. The UV/vis spectrum directly quantifies the colour of the sample and the technique is reliable and fairly straightforward to carry out experimentally. Conventional UV/vis spectroscopy is destructive, though only very small quantities of material may be required. The advent of microspectrophotometry, however, means that non-destructive measurements may be made, for example, on a single fibre.

This short review will discuss first the forensic application of these techniques to fibres and then to ink evidence. In both cases, some of the chemometric methods used to interpret such spectra will be described, with the application of principal component analysis to ink spectra being covered in some detail.

Trace evidence such as fibres, hair or glass fragments has particular forensic significance due to its ease of transfer and subsequent persistence, particularly on textile substrates. Notable cases in the UK where fibre evidence has been of crucial importance include the murder of Sarah Payne in 2001 and securing the conviction of Steve Wright for multiple murders in Suffolk in 2006.1

Although such trace evidence is usually present as a small number of fibres, the forensic analysis may often be accomplished on a single fibre, typically around 10–30 mm in diameter. Microscopic examination will usually determine whether the fibre is natural or synthetic, while observation of birefringence using polarised microscopy or Fourier transform infrared (FT-IR) microspectrometry, facilitates its chemical identification. The most commonly encountered examples include blue and black cotton, blue polyester and red polyacrylonitrile (acrylic) fibres. Analysis of colour is often crucial in the discrimination of fibre evidence—not all blue polyesters are the same!2 However, the strategies for extracting and identifying dyes from fibres are complex and may not lead to a successful outcome. Consequently, non-destructive testing using microspectrophotometry is the preferred approach.

UV/vis spectra from single fibres are often obtained using a spectrometer, such as the J&M Analytik MSP800 system, attached to a suitable microscope. Such an instrument enables acquisition of spectra from a spot size as small as 2 mm by 2 mm over a full wavelength range from 190 nm to 900 nm, limited only by the microscope optics. The fibre is mounted between a quartz slide and cover-slip, and then examined in transmission. A study involving a large variety of blue polyester fibres has been reported,2 which demonstrates the discriminating power of this technique. In this work 263 fibre samples from known sources had their UV/vis spectra acquired using a 6 mm by 60 mm spot size. The traditional method of comparison is to simply overlay spectra in pairs. To provide enhanced discrimination two new approaches were adopted: comparison of derivative spectra and including the UV as well as the visible spectral data in the analysis. Derivative spectra are a particularly appropriate tool where broad convoluted peaks are present in the original spectra as this approach is sensitive to inflections and subtle gradient variation. This work showed that both the derivative spectra and the absorption spectra must be indistinguishable for a match to be obtained between two fibres. In several cases, discrimination between different fibres was achieved principally on comparison of UV rather than visible light absorption.

A more recent study3 has focused specifically on the use of derivative spectra in this context. Using similar experimental techniques, a wide variety of different fibre types and colours were examined and the discriminating power of derivative spectra was evaluated. The conclusions were that, in many cases, this approach did not provide further discrimination than comparison of absorption spectra and some caution is often required. Indeed, where fibres showed some degree of spatial variation in dye uptake, derivative spectra could emphasis possible differences that were already visible in the absorption spectra thus leading to invalid discrimination.

The purpose of forensic ink examination is usually to determine whether the writing on a document has been altered by establishing whether the ink-line from one part of the text is the same as or different to that from another part. Although several ink types and technologies are now in use, the traditional ball-point pen is still responsible for a large proportion of the writing frequently encountered in forensic work. The composition of these inks is based on glycerols to give high viscosity, alcohols together with soluble dyes to provide colour, and resin to bind the ink to the paper. Both black ink, based on the dye methyl violet, and blue ink, based on Victoria (Basic) Blue, are in widespread use and have been extensively studied.

In the conventional analysis, the ink is solvent-extracted from small sections of the writing, which has been cut from the paper. Choice of a suitable solvent is not straightforward. Although ethanol–water is often used, pyridine–water offers a more aggressive alternative though it may also remove fluorescent or other material from the paper itself. Whether the composition of the extracted ink is identical in every detail to that originally deposited on the paper is an issue worth consideration. Recent work4 comparing the UV/vis spectra from inks extracted directly from the pen, with the same ink extracted from paper, revealed small but consistent differences when ethanol–water is used as the solvent.

For black ball-point pen inks, the UV/vis spectrum is dominated by the strong absorption at 585–590 nm from methyl violet. The precise position and shape of this feature depends on the mixture of partially demethylated species within the methyl violet formulation used by a particular manufacturer. In addition, a distinctive black hue is imparted to the ink through the addition of dyes absorbing across the remainder of the visible spectrum and into the near-UV; for example, yellow-orange dyes that absorb in the violet-blue region. Typical spectra shown in Figure 1 illustrate how readily many inks may be discriminated when subject to this analysis. These spectra were acquired in transmission on a Genesys 10 spectrometer using quartz cuvettes and a path-length of 10 mm. 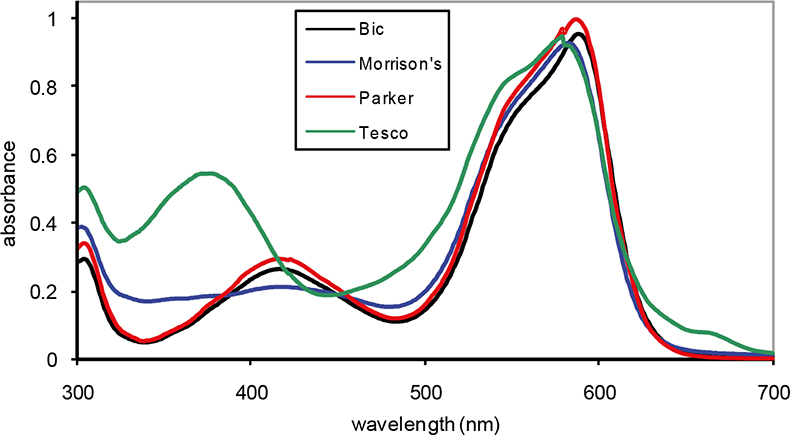 Discrimination of the two supermarket (Morrison’s and Tesco) pen inks from the Bic and Parker inks is easily achieved on the distinct differences in the spectra between 300 nm and 500 nm. These latter two pen inks, however, appear very similar at first sight. Expanding the section around the methyl violet peak (see Figure 2) shows that all four pen inks have distinctive profiles here. Are small differences in the profile significant or simply due to variation in sample preparation and procedures? In forensic work it is advisable to determine both the within-specimen and the within-sample (or among-specimen) variation. Ideally, the spectrum from the same specimen of material would be examined several times as well as making a similar analysis of different specimens taken from the same sample. The outcome of these results determines the uncertainty within the spectrum for each sample thus facilitating the comparison between samples of inks. 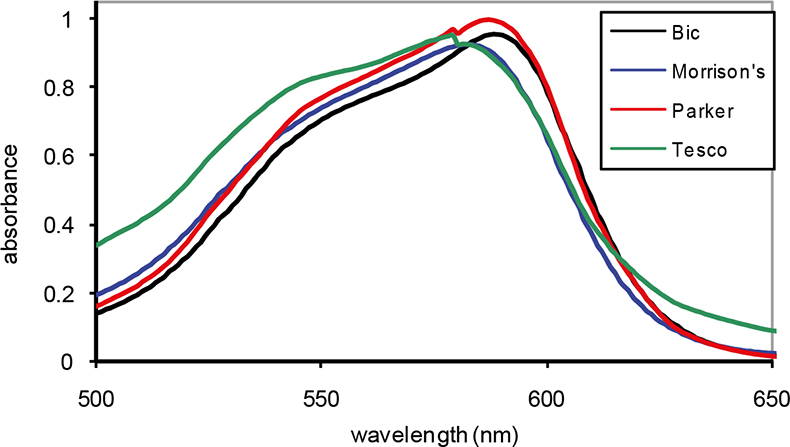 Figure 2. Discrimination of inks around the methyl violet absorption.

Application of chemometrics to ink analysis

Initially, the use of derivative spectra was investigated as a more discriminatory tool for the interpretation of the UV/vis spectra from extracted inks. Using the Savitzky–Golay approach to the combined smoothing and differentiation of equi-spaced data, it was found that the 13-point formula provided successful results for these data-sets. Figure 3 shows the result of applying this algorithm to the spectra in Figure 2. 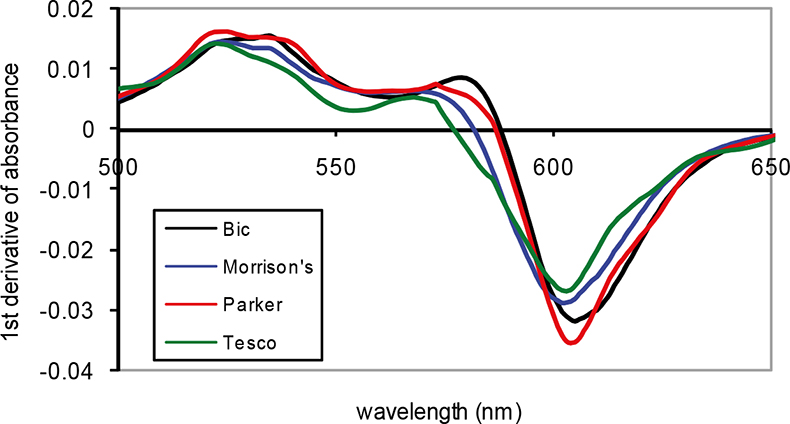 The small differences between the Bic and Parker inks, indicated in the absorption spectra themselves, are also evident here. However, this comparison is only slightly more convincing than Figure 2 and the process remains subjective.

A more successful alternative approach is to use principal component analysis5 (PCA). This has two advantages over the use of derivative spectra. First, it provides an objective and quantitative method for discrimination. Second, PCA reduces the dimensionality of the data so that subsequent comparisons may be made on a numerically more straightforward basis.

PCA facilitates quantification of the degree of variability among spectra by characterising a set of spectra in terms of a small number of principal components, based on criteria of uncorrelated differences within the set. Consequently, each spectrum in the set is described by a linear combination of these principal components with the admixture coefficients (here called loadings) for each providing a measure of the similarity or difference between any pair in the set.

Here, PCA calculations were carried out on a set of 16 spectra from ink extracted from writing made by nine different pens. In two cases, the Bic and Morrison’s pens, repeat extraction measurements were made to estimate the variability in these spectra. The result shows that the first three principal components describe over 99.5% of all spectral features. This means that the dimensionality of these data in each case is reduced to three loadings. The results of PCA are best displayed graphically, as loadings plots. In this instance, that for PC3 was plotted against the loading for PC2 and is shown in Figure 4. 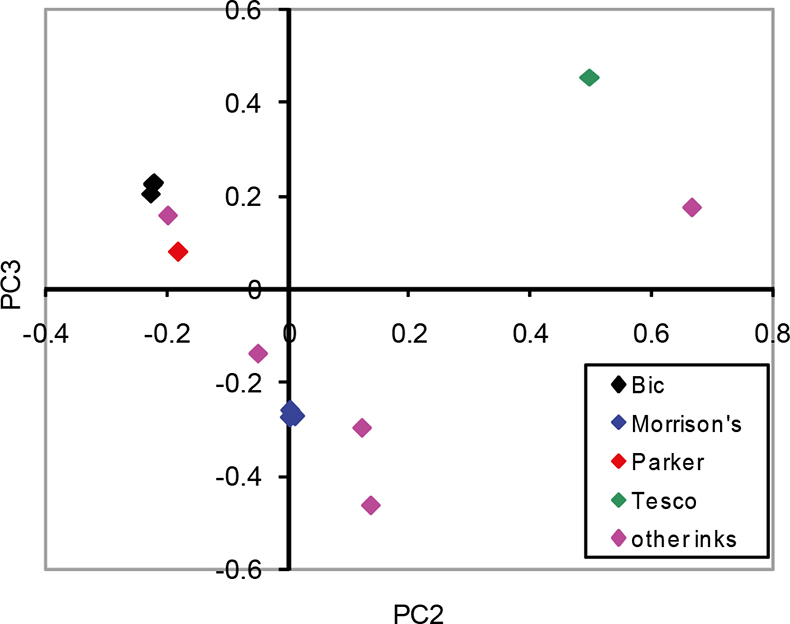 Inspection of Figure 4 shows that all inks are clearly discriminated on the basis of these two principal components. The multiple sampling measurements on the ink-line from Bic and Morrison’s pens reveal the typical variability in the analysis and these may be used in formal statistical testing of the distinguishability between sets of loadings. On this basis, the Parker ink where the raw spectrum (Figure 1) showed a strong similarity to that of the Bic pen is now clearly distinguished from it. Work on an expanded set of 25 pens4 has shown that the UV/vis spectra from the extracted ink-lines may be discriminated on the basis of the first three principal components in a PCA.

UV/visible spectroscopy plays a key role in the discrimination of colour in the forensic analysis of fibres and inks. The application of chemometrics, however, is vital in many cases to enhance such discrimination and to put it on a quantitative basis so providing objective justification for the conclusions of the analyst.

The support of the Nuffield Foundation and the contributions of Sarah Sherratt and Vladimir Zholobenko to the inks research are acknowledged.