Column properties that make an impact on ion chromatography

For the separation of ionic species, ion chromatography (IC), a type of liquid chromatography, is the method of choice. The most critical component of this technique is the separation column, which is selected based on factors that include the specific analytes of interest, the sample type and the required detection levels. This article outlines the column parameters that impact the separation of charged species in solution using ion-exchange chromatography and the developments that have continued to redefine what is possible with an IC system.

Role of columns in ion chromatography

The characteristics of a separation column are one of the most critical considerations for obtaining optimal results from an ion chromatography (IC) system (Figure 1). The column dictates how well the ionic components of a solution are separated, which is essential for confident peak integration. It determines whether analytes will be only crudely detected or quantified in the parts per billion (ppb) range.

The quality of the separation is influenced by multiple factors, some of which can be varied by adjusting the method parameters and others that are fixed by the properties of the column. Chromatographic conditions that the system operator has direct control over include eluent concentration, flow rate, temperature and sample loading volume/concentration. Because IC is limited to just a few eluents, choosing a column with the right selectivity is critical for achieving a desired separation, especially when analytes are of the same charge. The initial column selection is the focus of this article, and the characteristics that will be discussed are particle size, surface area, resin surface chemistry and format. The interplay of the instrument method variables along with the selected column’s stationary phase dictates how well the analytes are separated, ultimately determining the quality of the chromatographic data obtained and the quantification that can be attained.

Styrene-based polymers were preferred over the silica-based materials that were commonly used in High Performance Liquid Chromatography (HPLC) due to their superior chemical stability. The first widely used anion-exchange stationary phases were created by coating a surface-sulfonated styrene-DVB resin with a suspension of colloidal ion-exchange resin bound to the cation-exchange surface.

These columns originally used phenate-based eluents, but a hydroxide-based mobile phase was a more attractive option because of the low background achievable and the potential for use in gradient elution. However, the low eluting strength of hydroxide eluents meant high concentrations were needed to displace all the anionic analytes that were bound to the resin. This required frequent offline regeneration of the packed bed suppressors that were in use at the time, causing a bottleneck for throughput. Another concern with the use of manually prepared hydroxide-based eluents was the inability to eliminate carbonate impurity, which, by itself, has a strong analyte displacing potential, creating an unpredictable elution profile. When carbonate-based eluents were tried their strong elution potential meant that lower concentrations could be used, and, thus, fewer suppressor regenerations were required. This relative ease of use resulted in their widespread adoption and production of columns with peak separations optimised for use with carbonate eluents. As suppressor technology matured to the point where offline regeneration was no longer required and adequate suppression capacity was available, hydroxide-based eluents became a much more favourable mobile phase because of their ability to be suppressed to water. This is the ideal background for conductivity measurements, producing the best signal/noise ratio to achieve the lowest limits of detection with conductivity detection (CD). With the development of electrolytic eluent generation (Reagent-Free IC, RFIC), on-demand production of hydroxide-based eluent from deionised water meant that carbonate contamination was no longer an issue. An added benefit is that highly reproducible gradients, which focus peaks to yield greater chromatographic peak capacity, can be produced without the need for a proportioning pump.

The first resins used for IC were approximately 35 µm in diameter. Modern IC stationary phase particles from Thermo Scientific range in size from approximately 9 µm to 4 µm. The development of smaller particles in both HPLC and IC columns was driven by the increased column efficiency that is obtained, and extension of the range of flow rates at which this is maintained, giving users more flexibility in optimising their method. What this means to the chromatography is taller and narrower peaks that are better separated, resolving closely eluting analytes that could previously not be distinguished and facilitating peak integration, which leads to more accurate quantification.2,3

A consequence of developing ever smaller sized particles is the need to develop, in parallel, instrumentation that can handle the higher backpressures that arise. Thermo Scientific™ Dionex™ High Pressure IC (HPIC) systems meet this challenge with pumps, valves and consumables that can tolerate backpressures of up to 5000 psi, which allow users to take full advantage of a column’s potential. While some vendors reduce the column length to achieve shorter run times, Thermo Scientific combines a shorter column with smaller particle resins to not only achieve faster run times, but also maintain chromatographic efficiency and resolution (Figure 2). 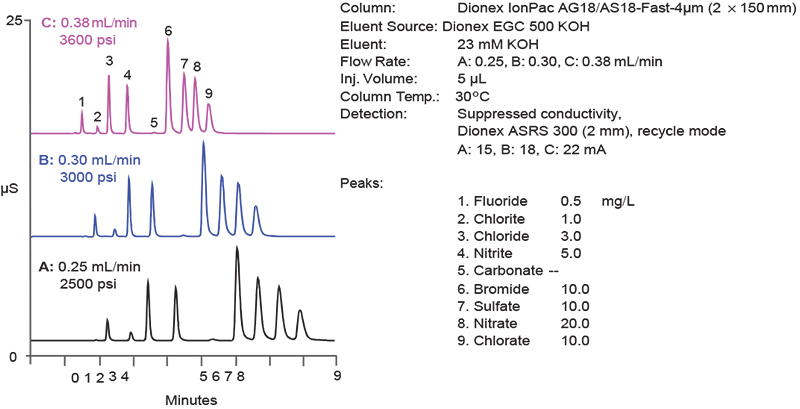 The initial polystyrene-DVB particles used for IC were non-porous and resulted in columns with relatively low capacity. To handle high analyte concentrations, improve the resolution of weakly retained ions, analyse high-ionic strength samples, and to load a higher sample volume without overloading and peak broadening, high column capacity is needed. To achieve this, resins have been engineered with varying amounts of porosity, allowing more surface area per particle to be exposed to the mobile phase and, thereby, providing more opportunities for sample analytes to bind to the surface, increasing capacity. This is exemplified by the change in core resin used for Thermo Scientific™ Dionex™ IonPac™ AS11-HC particles from microporous as in Thermo Scientific™ Dionex™ IonPac™ AS11 (<10 Å pores, Figure 3A) to supermacroporous (2000 Å pores, Figure 3B). The larger pores present more surface for the agglomeration (attachment) of latex particles (80 nm Thermo Scientific™ Dionex™ MicroBead™ resin), increasing the column capacity from 45 µeq to 290 µeq (>500 %) for a 4 × 250 mm column. 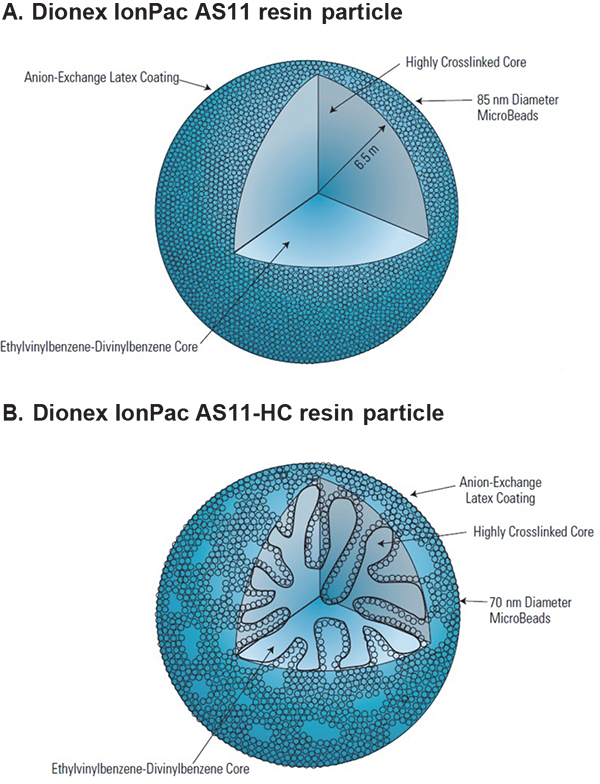 The surface of organic polymers used in anion-exchange resins can be functionalised (i.e., have their properties altered) using a two-step process of 1) addition of a chloromethyl group to the aromatic resin skeleton, followed by 2) amination with a tertiary amine. For cation-exchange resins, functionalisation consists primarily of surface sulfonation via reaction with concentrated sulfuric acid or carboxylation via reaction with carboxylic acid (see Reference 4 for a comprehensive review).

While the first stationary phases consisted of lightly sulfonated (R–SO3–) polystyrene-divinylbenzene (PS/DVB) polymer, the surface properties of IC resins used today are modified by employing multiple strategies that include encapsulation, polymeric grafting, chemical derivatisation, step-growth and agglomeration (Figure 4). The precise way in which the stationary phase is synthesised and functionalised enables the selectivity of each resin to be finely tuned to meet specific application requirements. 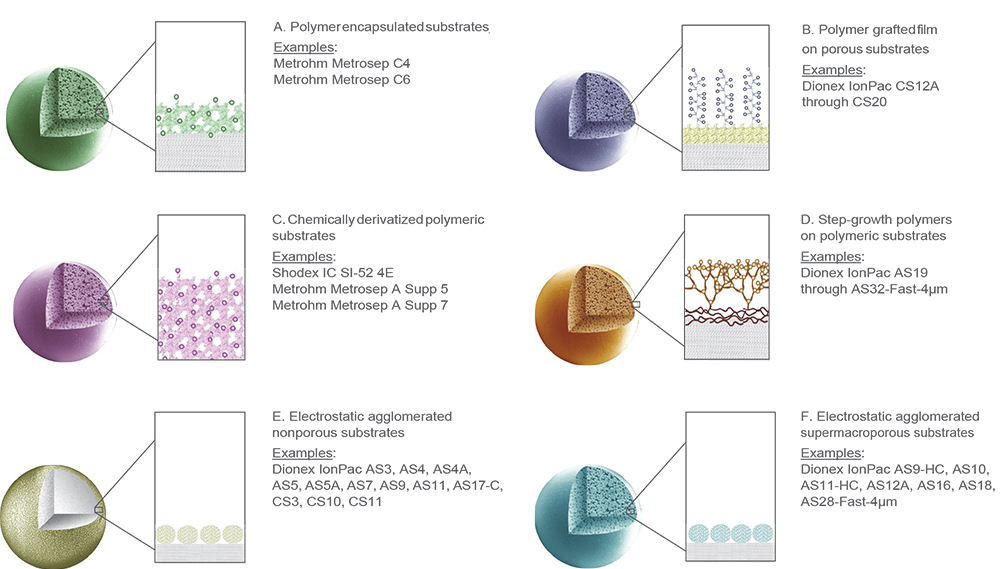 Separation columns are available in multiple formats that vary by inner diameter (i.d.) and length. The column diameter used is primarily determined by the chromatographic system’s properties, the sensitivity required and the sample volume (Table 1). Most standard IC systems can run analytical (4 mm i.d.) and microbore (2 mm i.d.) columns. However, Thermo Scientific™ Dionex™ ICS-4000 and Thermo Scientific™ Dionex™ ICS-6000 HPIC systems are the only IC systems currently available that are capable of running capillary (0.4 mm i.d.) columns. The pumps used in both systems reliably and precisely deliver flow rates in the µL min–1 range. They are equipped with components such as suppressors, eluent generators, degas assemblies and carbonate removal devices that are specifically designed for capillary flow rates and volumes. The low sample volumes and eluent consumption of capillary IC result in minimal waste disposal requirements and allow the system to be run continuously. Consequently, these systems are always ready to run samples because there is no need for extensive equilibration prior to the start of a run, which is required with standard bore systems that are regularly put into standby mode to save eluent and reduce waste. There are more than 30 Thermo Scientific capillary anion- and cation-exchange columns, many in 4 µm particle size (Table 2).

A history of innovation

From the very first “Anion Separator Column” to the present day Thermo Scientific™ Dionex™ IonPac™ AS32-Fast-4µm column, Thermo Fisher Scientific has been dedicated to continually developing new columns to meet the ever-changing needs of our customers, who are tackling new analytical challenges every day (Figures 5 and 6, Reference 5).

One example of column development driven by customer needs is the recently released Thermo Scientific™ Dionex™ IonPac™ AS31. One of the limitations with the analysis of haloacetic acids (HAAs) in drinking water using US EPA method 5576 is the analysis time of approximately one hour per sample. This limits the number of samples that can be analysed in a day, increasing the cost per sample. Customers expressed a desire for a more economical method.

To address this need, the column chemistry was modified to change the elution order of sample constituents so that the components that were directed to waste or to the mass spectrometer for detection could be grouped more efficiently. The net result was a 39 % decrease in the overall run time leading to a significant reduction in cost per sample and time to result.7

Another example of solid-phase modifications that resulted in greater ease of use is the optimisation of the surface properties of the Thermo Scientific™ Dionex™ IonPac™ CS17 column resin so that it does not require the use of an organic eluent modifier to resolve amines and alkanolamines.8 Aside from making manual eluent preparation more straightforward, a RFIC system can now be used, which further simplifies the operation, obtaining precise, reproducible results.

The history of innovation by Thermo Fisher Scientific is exemplified not only by the regularity of new column introductions each year, but also by the number of patents that they have been issued for developments in IC column technology, which is unmatched in the industry (Figure 7). 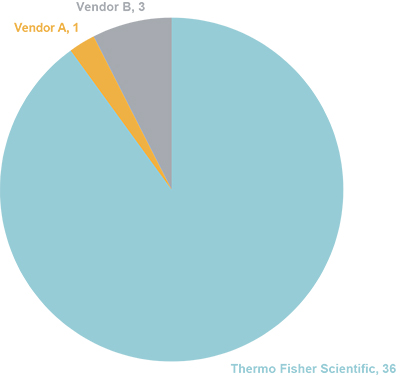 The continual response to customer needs by Thermo Fisher Scientific has led to the creation of an unrivalled portfolio of IC columns that provides solutions to tackle even the most demanding chromatographic challenges.